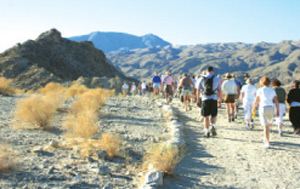 In 1921, prominent San Francisco businessman, Walter H. Morgan, came to the Desert on the advice of his doctor to heal his recently diagnosed tuberculosis. He purchased 1,400 acres from the local Cahuilla people in an area called “Happy Hollow.” His goal was to create a private sanctuary where guests could escape for rest and relaxation. In 1926, the majestic La Quinta Resort was born. The Resort quickly became a retreat for Hollywood’s elite and recognized worldwide for its luxury and restorative Desert setting. When the City of La Quinta incorporated in 1982, it was named after the resort.

So it is apt to say that the City of La Quinta grew from a doctor’s advice. The focus on healthy living was established early on and has remained a top priority. La Quinta offers 142 acres of natural areas with hiking trails, several miles of biking paths and equestrian trails, 25 golf courses, 11 parks, and a weekly farmer’s market in Old Town. In January, the City announced a partnership with the Desert Recreation District (DRD) to remodel the La Quinta Community Center into a new fitness center scheduled to open in Summer 2011.

The center will feature state-of-the-art cardio and fitness equipment, a juice bar, and affordable access for all residents ($50 for an annual facility use pass that also allows access to DRD fitness centers in Indio and Palm Desert). 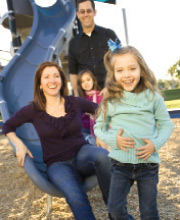 Family at play in one of La Quinta’s 11 parks

Last year, La Quinta adopted a statewide campaign created to promote healthier communities called “HEAL”, Healthy Eating Active Living. This initiative is used as a guide for government policies and has resulted in park improvements, increased physical activity offerings and healthier food and drink choices at concession stands. As a result of its efforts, La Quinta was recently awarded the “Healthy Living Advocate Award” by the Coachella Valley Health Collaborative.

Mayor Don Adolph states, “We’re proud to be a health-conscious city offering a variety of amenities that inspire our residents to stay active and healthy.”

One Response to “La Quinta: Born of A Doctor’s Advice”