Humana Challenge Nominated For ‘Sports Event of the Year’ And Local Charities Reap the Rewards! 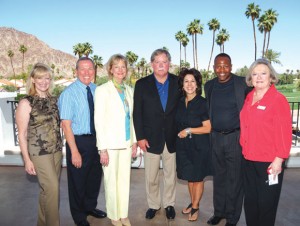 84 million steps from players, fans, and the public resulted in a $500,000 donation to local charitable organizations by Humana.

In the company of Super Bowl XLVI (New England vs. the New York Giants) and the 2011 NBA Finals (Dallas Mavericks vs. Miami Heat), the 2012 Humana Challenge in partnership with the Clinton Foundation was nominated for Sports Event of the Year by respected industry publications SportsBusiness Journal and SportsBusiness Daily.

The PGA TOUR event was the only golf event nominated in the category, one of 15 categories the publications will honor at the fifth annual Sports Business Awards May 23 in New York.

The awards recognize outstanding achievements in sports business from March 1, 2011 to Feb. 29, 2012. “This is an unprecedented honor for our event, one that we are very, very proud to receive,” said Tournament Chairman Larry Thiel.

Attendance was up 68% for this year’s event which drew praise and worldwide attention for its revamped format, stronger field, and proactive community involvement with focusing focus on health and wellness. Humana promoted healthy, active lifestyles with a Healthy Walk & Fun Fair, a farmer’s market, pedometers for tournament fans, and the construction of a recreational area in the East Valley. President Clinton’s conference Health Matters: Activating Wellness in Every Generation brought attendees from across that nation and international recognition to the Valley. The conference encouraged local organizations to take action to improve the health of our community.

This honor is the latest for an event that had its philanthropic arm, Desert Classic Charities (DCC), recognized in November as the Outstanding Philanthropic Foundation at the National Philanthropy Day Awards luncheon. On April 20th, DCC awarded local charitable organizations with funds raised from this year’s event.

Humana also created a special initiative to encourage physical activity surrounding tournament week through their Walkit pedometer program. 12,000 pedometers were distributed to fans, players and the general public, and 84 million steps were accumulated resulting in an additional $500,000 contribution to local groups. This funding is being used to create an innovative partnership among Boys & Girls Clubs of the Coachella Valley, Family YMCA of the Desert, and KaBOOM! Their shared goal is to promote healthy behaviors in children and families throughout our community.

This year’s event raises Desert Classic Charities total contributions to local charities to $52 million since its inception in 1960 with Eisenhower as a major benefactor.

Desert Health® looks forward to being a part of the 2013 Humana Challenge and salutes Desert Classic Charities, Humana and the Clinton Foundation for helping to improve the health and well-being of our community.