Don’t Take Away My Wheat!

Satisfying alternatives for your favorites

If you’ve just read about Wheat Belly, you may be discouraged – or even downright angry – at the thought of living without wheat. It’s understandable when you consider that the large majority of our food is made with wheat flour or gluten. There is not an aisle in the grocery store without it, and for many, taking away wheat is like taking a half-eaten lollipop from a child. Makes sense, since sugar has been scientifically-proven to be addictive, and as you’ve just read, wheat affects your body just like sugar.

Fear not! There are many satisfying alternatives that may seem “less than” at first, but will soon become your favorites as you start to realize just how good they make you feel.

First, it’s important to clarify the difference between wheat and gluten.  Gluten is the protein in wheat, rye, and barley that gives elasticity to dough, helping it rise and keep its shape. It also gives foods that nice, chewy texture (think gluten=glue).   But it also is found in unassuming products like soy sauce, ice cream, seasonings, and even shampoos, so those diagnosed with celiac disease have much stricter parameters.

However, if you are giving up wheat simply for health’s sake, starting with gluten-free (GF) grains and non-grain alternatives is an exceptional first step. Just keep in mind that if you simply replace wheat with GF carbs, you will be cutting down on the inflammation factor, but not necessarily losing the weight. Thus, try to focus on non-grain alternatives. 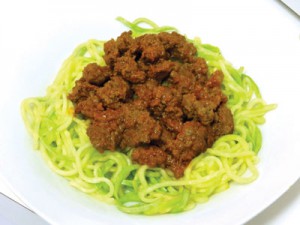 Zoodles (zucchini noodles) are a healthy alternative to pasta

Can’t live without pasta? Our best pasta alternative is zoodles, zucchini noodles. Any squash will do, but zucchini has a nice texture (and ‘zoodles’ is fun to say). You create the noodles using a vegetable spiral slicer or julienne slicer, then sauté and top with your favorite pasta sauce. Or, try spaghetti squash, which falls into strands when baked and grazed with a fork. Another option is to simply replace pasta with eggplant in traditional Italian dishes.

And when you have to have pasta, simply use quinoa (best choice) or brown rice pasta, both of which are readily available in grocery stores. They cook a bit differently, but taste just as good!

Bread. There are many GF breads (and even more recipes!) on the market today. Tom and Ali’s recipes in Nourishing Meals use teff, buckwheat, coconut, almond, sorghum and millet flours mixed with nuts for flavor, and chia seeds, flaxseeds and/or eggs to help bind the dough. They warn that breads from white rice flour and potato starch can cause blood sugar spikes like wheat, so seek alternatives, like those made from nuts and seeds.

Best choice? Try to get out of the habit of sandwiches at lunch and bread with dinner. What do you eat on the go? Cold cuts and sliced veggies fit in sandwich bags just as well as sandwiches. And when out to dinner, say no to the bread basket; start your meal with olives or antipasto.

Pancakes, Waffles & Biscuits. Research shows that people who eat a protein-packed breakfast lose weight more easily and keep it off longer than those who eat a sugary (carb-loaded) breakfast or skip it all together, says local expert JJ Virgin who just released The Virgin Diet Cookbook. The best alternative to pancakes and waffles is a different breakfast choice altogether, such as “Joe’s Special” with egg, spinach, mushroom and onion, or Virgin’s bacon-and-mushroom sweet potato hash (double this recipe for a dinner side!). Her top choice: a power-packed protein shake.

Not working for you? Good news. All of these comfort foods are available GF at the grocery store (standardly in the freezer section). Even Bisquick has a GF option. 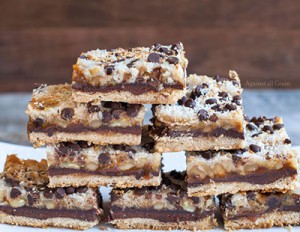 Gooey, Chewy Snacks. Danielle Walker, author of Against all Grain won Paleo Magazine’s Best of 2013 in the Treat category with her Seven-Layer Bars. The recipe uses coconut and almond flour and will satisfy the strongest of cravings. It’s available online, and grocery store shelves are packed with GF treats.

Hopefully, if you are removing wheat products from your meals, you are eating more vegetables and proteins, so your sugar cravings will dissipate. Healthier snack alternatives include raw nuts and seeds, celery sticks with almond butter, avocados, or hummus with apples or veggies.

Ready to give it a try? Here are a few last words of advice. According to Dr. Davis, approximately 30 percent of people who abruptly remove wheat products from their diets will experience a withdrawal effect with symptoms such as fatigue, mental fogginess, and irritability. The good news, he adds, is that the symptoms are standardly short-lived (3-5 days). Those who suffer are usually the same people who experienced strong cravings as their metabolism relied on a constant supply of readily absorbed sugars, such as those in wheat.

Davis also notes (and many I know can attest) that once you are wheat-free for a couple of months, you may find that the reintroduction of wheat provokes undesirable effects ranging from joint aches to asthma to gastrointestinal distress. He suspects that this is due to wheat’s inflammatory effect on newly healed organs and joints.

It just may be this little self-experiment that makes you realize what this Wheat Belly stuff is all about.