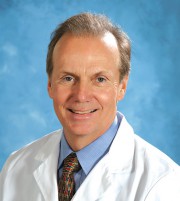 Scherger is also an avid reader and last September received an email recommendation from Amazon for Wheat Belly by cardiologist William Davis, MD. Little did he know that this accidental discovery in his in-box would have a powerful impact on not only his life, but also his patients and many of his peers.

At 46, Scherger had not competed in long-distance running for 15 years which resulted in unwanted weight and a lipid panel that told him a statin medication may be in order. Not one to take medications, he returned to competition which helped reduce his weight, but not his body mass index or waist size (much to his surprise). Scherger chalked it up to age and didn’t think much of it until reading Wheat Belly.

First published in 2011, Wheat Belly takes a scientific look at the genetic modification of the world’s wheat production and the effect it is having, not only on our bulging bellies, but also on the rise of chronic disease worldwide. Author Davis provides a thought-provoking and carefully researched case for eliminating wheat from our diets for long-term weight loss and relief from the most critical health concerns of our time including auto-immune diseases like MS and lupus, diabetes, rheumatoid arthritis, acid reflux and even cancer.

“The book immediately made so much sense to me,” say Scherger who had always been a bread eater. In his practice, he promoted high fiber cereals in the morning and the consumption of healthy whole grains, including wheat.

Altering nothing else in his diet, he lost 15 pounds in two months. His cholesterol dropped 20 points and HDL (good cholesterol) went up 5. He now wears size 33”.

“It is almost magical what happens when you do this,” he says. “Everyone looks at me and comments on how different I look.” His results were reinforced when he starting speaking with other Wheat Belly fans in the office. One associate lost 8 inches off her waist and two others had lost over 100 pounds combined.

Scherger also saw changes in his skin. “I had suffered with acne in my youth and was now experiencing adult acne (rosacea) for which I was using a topical medication to control symptoms.” In Wheat Belly, he learned that both his childhood and adult acne were most likely caused by his wheat consumption. “I gave up wheat in September and the rosacea disappeared. I haven’t used the medication since October.”

Scherger isn’t the only doctor joining the Wheat Belly Revolution. On his blog, Davis posts letters from practitioners throughout the world who feel they have found the answer for patients saddled with expanding waistlines and chronic conditions.

As Davis eloquently explains, the unspoken issue with wheat is the mass hybridization that has taken place over the past 60 years to produce faster growing crops immune to disease and requiring less fertilizer. Studies now show that these genetically modified strains – which make up 99 percent of all wheat grown worldwide – have undergone significant structural change resulting in wheat gluten proteins that have become inflammatory agents (and are associated with the growing auto-immune condition known as celiac disease), and a higher glycemic carbohydrate load which increases appetite and fat deposits – particularly visceral (deep fat that wraps around organs), and abdominal fat.

Davis informs us that today’s wheat products elevate blood sugar levels more than virtually any other carbohydrate – including candy bars and sugary sodas. He tells us that this information is not new stating studies back to 1981.

The wheat crop transformation actually grew from a noble attempt to reduce world hunger, which it did, but at a significant cost we are now paying. In 1943, collaboration between the Rockefeller Foundation and the Mexican government to help that country achieve agricultural self-sufficiency grew into an impressive effort to increase the yield of corn, soy and wheat worldwide.

Geneticist Norman Borlaug is credited for reaching this goal with the creation of a high-yielding dwarf wheat that reached maturity in less time. Borlaug’s invention was distributed across the globe and in 1970, he was awarded the Presidential Medal of Freedom, The Congressional Gold Medal, and the Nobel Peace Prize. Upon his death in 2009, the Wall Street Journal eulogized him saying that “More than any other single person, Borlaug showed that nature is no match for human ingenuity in setting the real limits to growth.”

Davis goes on to state: The peculiar oversight in the flurry of breeding activity…was that, despite dramatic changes in the genetic makeup of wheat and other crops, no animal or human safety testing was conducted on the new genetic strains that were created…So urgent was the cause of world hunger, that these products of agricultural research were released into the food supply without human safety concerns being part of the equation.

It was assumed the plant hybridization, which has taken place for centuries, was harmless, even though these new crops were completely dependent on human assistance for survival and could not survive alone in the wild.

Scherger’s crusade has received the attention of his peers, and others are starting to recommend Davis’s book to their patients. “People are calling and asking me, ‘what’s this book you are recommending?’ Others look at me and say, ‘I’ve got to start that Wheat Belly program.’” He bought 15 copies for his department.

“I feel better, younger, lighter and stronger,” he says. “I realize that I may now reach my goal of running a marathon in under 4 hours which I haven’t done since 2002.” In December, he ran a half marathon in under 2 hours (which he hadn’t done in 8 years) and repeated that accomplishment in February at the Palm Springs Half. In January, he ran the Avalon 50 (mile) race on Catalina Island dropping 33 minutes off last year’s time.

What is his recommendation to patients?

Scherger agrees with Dean Ornish, MD, and others who say that if you really want to make a change in your health, you need to cut items out versus cutting down on them. “If you try to cut down on items, every day will become a struggle. It is much harder and usually not an effective method. If you make the rule to cut wheat out of your diet good things will start happening and you will be motivated to continue.” He adds that once you identify healthy alternatives and get over the cravings (yes, it is scientifically proven to be addictive), you won’t miss it.

“We’ve learned in nutrition that you can’t prescribe a low fat diet (which was done for decades) because people will replace fats with carbs and actually gain weight.” He warns doing the same with wheat and closely monitors his patients who embrace the book. “When you simply replace wheat with other starches (such as rice flour), you are reducing the inflammatory factors, but are not lowering your carbohydrate intake and will not lose the weight.” He also recommends watching alcohol consumption as alcohol is a carbohydrate.

Scherger notes that age is not a factor. “I have an 86-year-old friend who lost 26 pounds in 7 weeks by eliminating wheat. He now buys Wheat Belly for everyone he knows.”

Wheat Belly is available locally at Barnes & Noble and online at Amazon.com. For more information from Dr. Davis visit www.WheatBelly.com