IV Therapy for Treatment and Wellness

Intravenous therapy, commonly known as I.V. therapy, is often thought of in conjunction with cancer chemotherapy or as a necessity for hospitalized patients. However, it has a wide variety of applications from eliminating migraines to helping the body get over a cold or flu to assisting in athletic training.

I.V. therapy is the procedure of introducing fluids directly into a vein. Nutrients or medications can be diluted in the fluid, which allows the constituents to circulate quickly through the body and to build up higher doses than are achievable by taking pills or receiving injections.

Attempts at I.V. therapy were undertaken as far back as the 17th century, but not until the 20th century did the procedure become viable with the advent of modern infection control. Use of intravenous vitamin C to treat shingles and herpes outbreaks was reported in a dermatology journal in 1936. Vitamin C shortened the duration of blisters to 2-3 days and prevented neuropathy (nerve pain).1 In 1948, I.V. vitamin C was used to treat a polio epidemic in North Carolina and resulted in all 60 patients feeling well after 72 hours and having normal spinal taps.2 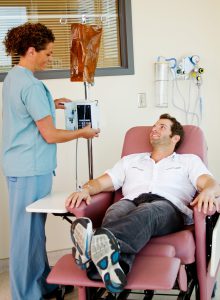 Intravenous infusions can take from 15 minutes up to three hours.

Many current I.V. formulas contain a variety of vitamins and minerals rather than a single component. This is often called a Myers’ Cocktail after Baltimore physician John Myers, who is credited with pioneering the use of multiple nutrients in the treatment of illness. Calcium, magnesium, B vitamins and vitamin C are included, and the physician can vary the dose, the rate of infusion and the constituents as needed. Dr. Myers found that fatigue, depression, chest pain and heart palpitations were well controlled by the treatments but would recur if the patient went too long without an infusion.

Dr. Alan Gaby continued Dr. Myers’ work and reports that many relatively healthy patients chose to receive infusions because it enhances their overall wellbeing for periods of a week to several months. Dr. Gaby has successfully treated asthma attacks, hay fever and muscle spasms using a modified Myers’ Cocktail. He also found that fatigue improved in many patients who did not benefit from vitamin B12 injections.3

Another category of I.V. therapy uses oxidizing agents, which increase the amount of oxygen in the body and neutralize the damage of free radical waste products. These agents include hydrogen peroxide, hydrochloric acid and high dose vitamin C. Tumors, yeast and fungi prefer an anaerobic environment—one without oxygen—so adding oxygen makes the body’s terrain less hospitable to these microorganisms.

While it may sound a bit frightening to receive one of these chemicals, your body already produces hydrogen peroxide and hydrochloric acid as part of its disease-fighting arsenal. The amount infused is minute and is diluted with saline so as not to irritate the vein at the injection site.

Vitamin C also works by producing hydrogen peroxide, which is further metabolized into water and extra oxygen. Its anti-viral effect is dependent on the concentration in the blood and occurs at 10-15 mg/dL, which is higher than achievable by eating vitamin C-rich foods or taking vitamins orally.4 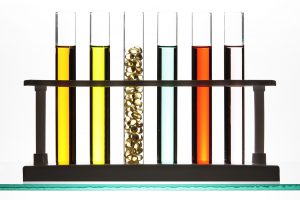 A variety of oxidizing agents, minerals and/or vitamins are combined for different treatment or wellness protocols.

Higher doses of vitamin C, up to 100 grams, are used in the treatment of cancer resulting in improved quality of life, fewer chemotherapy side effects and reduced tumor size in some patients. Additionally, vitamin C has been shown to work synergistically with radiation to induce DNA damage in several types of tumor cells.5

An intravenous infusion can take anywhere from 15 minutes to 3 hours, depending on the nutrients and the volume of fluid used. Patients are usually seated in a reclining chair in the doctor’s office and are free to read, rest or use electronic devices during the procedure.

It is necessary to consult with a physician before commencing I.V. therapy, and laboratory testing may be required to make sure that you can safely receive all the benefits from this powerful healing modality.

Dr. Jessica Needle is a naturopathic doctor practicing at Optimal Health Center in Palm Desert and can be reached at (760) 568.2598.

Taking Time to Paws and Reflect I was all set to theme this article, “Is there…

Biofeedback: A Non-Invasive Intervention The Centers for Disease Prevention and Control (CDC)…