Health is a Choice 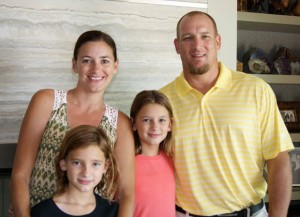 Trent Hauswirth of Palm Desert with his wife, Alexis, and daughters Camille and Shea.

BASEBALL AND BEER. For a large portion of his life, Palm Springs native Trent Hauswirth cherished these favorite American past times. He was a high school jock who excelled at baseball. He was drafted out of high school and played minor league ball with the Kansas City Royals for three years.

Trent, 39, always considered himself ‘a big guy.’ He was 6’2” and 220 pounds when he graduated from high school and 235 when he played ball. At spring training each year, coaches would tell him he was out of shape, but he was convinced that he was ‘just big.’ He also attributed his high blood pressure to his size and didn’t think much about it.

Although he admits not taking very good care of himself, as an active former athlete Trent always thought he was in shape. He continued to think that way until knee surgery came calling at 37 years old, and initial tests showed that he was a good candidate for stroke. His blood pressure was 190/110 and he was 300 pounds.

“That was my wakeup call,” Trent admits. “I couldn’t believe I had gotten to that size at 37. I have a beautiful family with two girls who were 8 and 10 at the time, and I wanted to be there for them.”

Not long after, Alexis, his wife of 14 years, recommended that Trent join The Desert’s Biggest Loser Contest which was hosted by Next Level Fitness of Palm Desert and the Live Well Clinic in La Quinta. The $5,000 prize was incentive. Could he give up beer? He hadn’t done that since high school and the 10-week program would be a challenge. Trent decided to bite the bullet and try.

The competition provided personal training one hour twice weekly. The remaining regiment was up to each participant, including their workout schedule and diet. Trent didn’t put too much into the first week – yet he lost an incredible 16 pounds. He knew a lifetime of suds probably added water weight, but the numbers inspired him. Trent decided to take this competition seriously.

“In my 20’s, I didn’t appreciate the opportunities I was given. My work ethic wasn’t strong. I liked staying out a little too late after games and didn’t commit myself. If I had, I would probably still be playing baseball.”

His thinking changed. He got up earlier and spent 2 hours in the morning working out. He rode his bike to work instead of driving. In the evenings, he didn’t go to his buddy’s pizza place for a slice and a beer; he returned to the gym for a spin class and another workout. He continued to eat a lot, but made healthier choices. No more fast food or junk.

Trent dedicated himself because he saw big results from simple lifestyle changes – and this time, he wasn’t going to blow the opportunity. As one who never liked mundane workouts in the gym, how did Trent motivate himself day after day?

“I changed things up and kept it interesting. It wasn’t long before the ‘workout high’ took over.” The surge of endorphins your body experiences from working out can hook and further motivate you. He also tried new exercise like swimming, and loved it. During the 10 week competition, he didn’t miss a day of working out. And for the first time in a long time, he felt really good.

Trent admits that he was a bit obsessive with the competition, but his wife Alexis admired his success and was very supportive, allowing Trent time to focus on his goals. 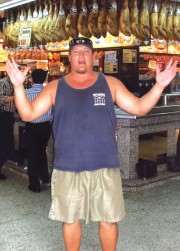 The results paid off. Trent lost an astonishing 77 pounds and won the competition. He went from 294 pounds to 217 in just two and a half months. It’s important to note that these results are not normal, nor are they recommended (or considered healthy) by most health care professionals. He ate a healthy and abundant diet (an estimated 2500 – 3000 calories a day) and was monitored by Drs. Ortiz and Fung of the Live Well Clinic throughout the program maintaining – even improving – his vitals. On the final weekend of the competition, Trent participated in his first triathlon.

So the big question…where is Trent today? Rapid weight loss usually isn’t maintained and a schedule like that is hard to keep.  However, Trent didn’t “diet” to lose almost a third of his size. He made lifestyle changes that remain with him today. Trent is now a personal trainer and likes working with clients who don’t particularly like working out. His blood pressure is 130/76 and he feels better than ever.

“The exercise and healthy eating is a lifestyle for me now. I never went back to beer. From drinking a couple beers a day to absolutely nothing is huge. It’s all about habits and once you make up your mind to break habits, your priorities change.”

Almonds and spinach have replaced lagers and hot dogs, and he is now trying a plant-based diet. “It’s an individual choice and I don’t push it on family or friends. And it may not be a lifestyle choice I maintain, but healthy choices will also be a priority for me.” 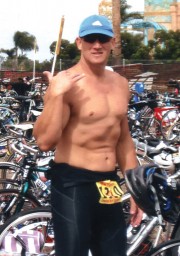 What is his inspiration to others?  “Working out is easy. Convincing your mind to make changes is the hardest part. Start with giving up one habit and when you start seeing results, others will follow.” As a trainer, his passion is inspiring others to ‘convince their mind’ that there are better options.

Trent is now able to do more with his two daughters, Camille (13) and Shea (10). They enjoy riding bikes (participating in Tour de Palms Springs each year as a family), hiking and playing soccer.

His greatest joy? “Knowing that I will be here for them for many years to come.”

Trent Hauswirth is a certified personal trainer at the Palm Desert Athletic Club. He has an 8 pm group on Monday, Wednesday and Friday open to all ($10 for members and $15 for non-members per session). His clients range in age from 18 to 62. He is also certified in youth fitness and is pursuing certifications in nutrition and golf fitness. Trent can be reached at (760) 217-3212.