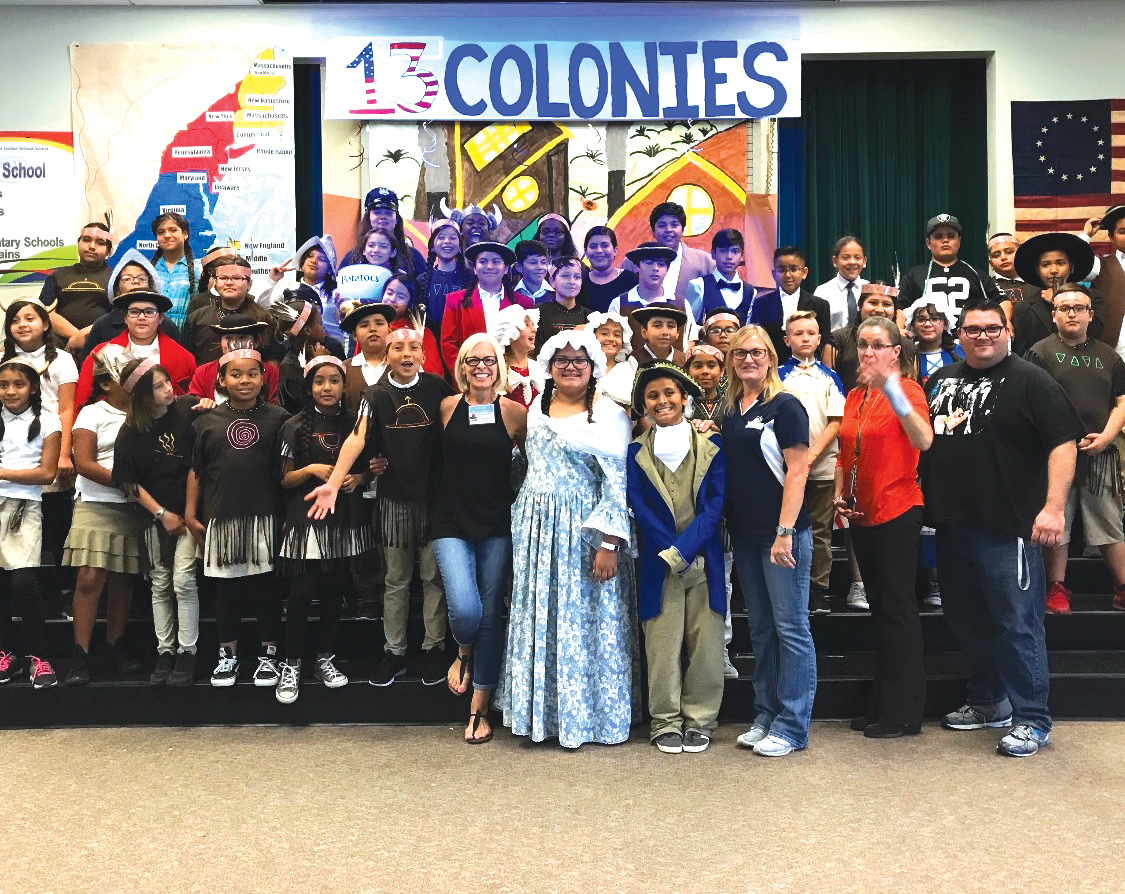 Pam Bruinsma made costumes for the 5th grade play. 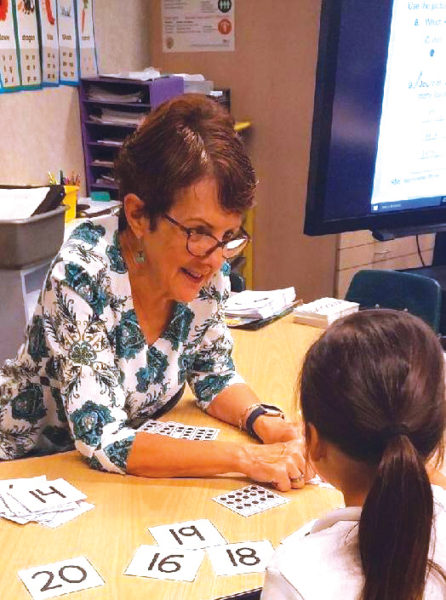 More and more research is identifying “giving back” as a key factor to living a long and healthy life. If this theory is true, Trilogy at the Polo Club’s Women of Wisdom, or WOW, have a few extra years coming their way. 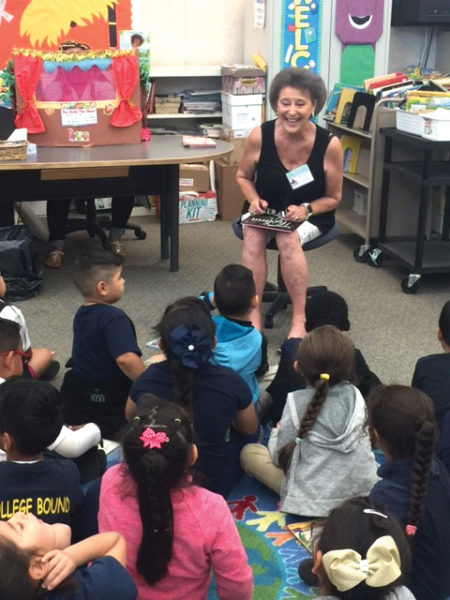 The self-starting club has over 100 women who get together to inspire each other and give back to the community. Last year, WOW adopted Theodore Roosevelt Elementary School in Indio and set out to accomplish whatever the school needed to get done. Gardens were built, blankets collected, costumes were sewn, and classroom volunteers partnered with students.

“I just get so energized from being there,” says WOW founder Janet Malek, a retired teacher of 35 years. “I get to walk out with such positive feelings – and then leave these adorable kids with their teacher. It’s been wonderful and they are so very appreciative of us.”

“We don’t get these blessings very often,” says Principal Daniel Martinez, adding that nothing like this has ever taken place at their school. “I have never seen a community come into a school, take over the needs of the school, and really get things done like this.”

One of the school’s objectives last year was to generate more community involvement, but they didn’t know where to start. They established the goal and simply put it out into the universe.

Shortly thereafter, Polo Club resident Michael Lacey, a substitute teacher at the school brought the idea to his wife, Yolanda, a former principal and WOW member, and the partnership flourished from there. Lacey even recruited other men from the community to help out (informally dubbed MOM, “Men of Means”). The community’s restaurant, June Hills Table, even offered to donate all bottles and cans to further raise funds for the school which is already bringing in $75 a month.

Under the umbrella “Labor of Love,” WOW asked the school for a checklist with which they could help. They aided large class sizes by creating small group tutoring for more individualized attention; read to kids for Read Across America Day; and collected 126 blankets each with a book for kindergartners over the holidays, a program they call “We’ve Got You Covered.” 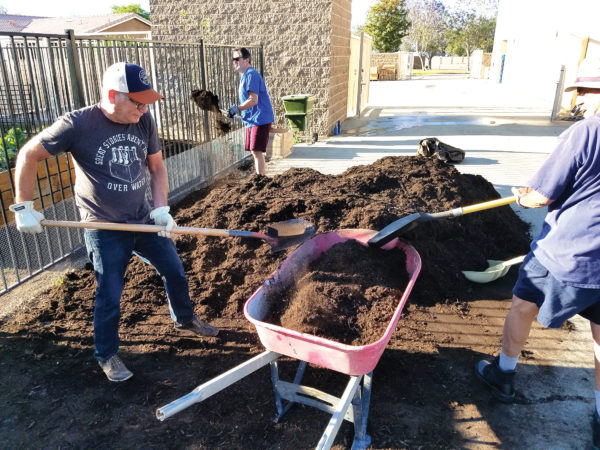 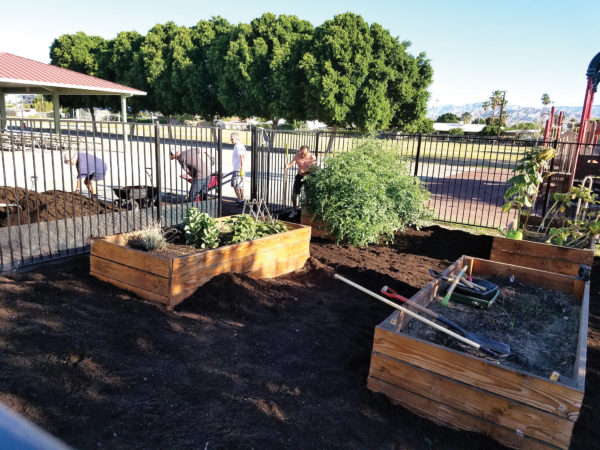 When the school’s 5th grade play was in need of costumes, WOW member Pam Bruinsma took on the challenge of sewing Colonial Days outfits. The group also helped fifth graders raise funds and accompanied them on their field trip to Riley’s Farm to experience the Revolutionary War.

WOW and MOM also donated a Christmas tree and decorated the school’s multipurpose room for their winter festival. Pictures with Santa (their principal in disguise) created another fundraising opportunity.

The group also enticed Hapara, an international educational software company, to donate a classroom program which allows Roosevelt students to virtually research with other students from across the country, in Canada and New Zealand. Polo Club residents Robin and Wayne Poncia even arranged for four new 55” televisions to be donated to the school for classroom-to-classroom global meetings, school management meetings, and school garden video monitoring.

School staff embraces the volunteers and is extremely grateful for all their contributions, says Roosevelt’s Project Manager Latanya Strange. “As a teacher, I can honestly say, it is really easy to feel overwhelmed and to just give up. But WOW came over and injected some spirit back into the school, and we can only say thank you so very much.” 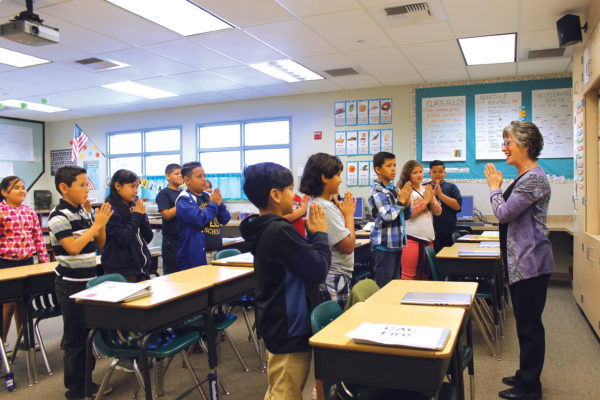 Lacey, whose career was in education, says Roosevelt is a special school. “There is so much energy which is something that usually starts at the top. It is nurtured and supported all the way through to the students; they want to be there and they want to learn. It’s a culture of learning and I am honored to be a part of it all.”

Think about all the benefits our next generation would receive if each neighborhood in the Coachella Valley adopted a school. All it takes is willing administration and a creative group of enthusiastic volunteers.

This year WOW and MOM plan to seek grants to pay for larger projects like maintenance of the school garden which the men built with donations from Burrtec and Home Depot. The first harvest will be prepared with the kids in the fall from menus submitted by WOW members. 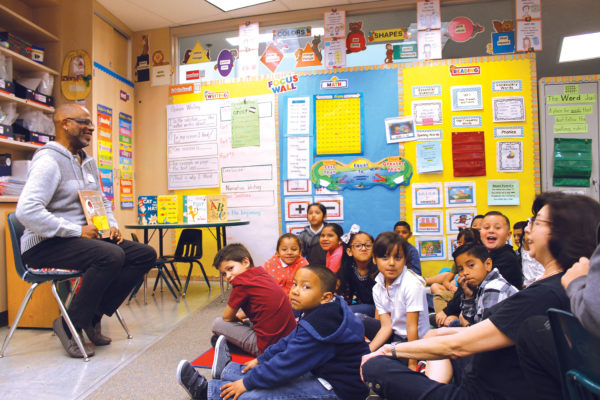 “Thank you very much for fulfilling our goal and for paying it forward,” says Martinez. “We are a better school because of it.”

For the women (and men) of WOW, the benefits may even be greater.

If your group would like information on how to start a volunteer program with a school, please contact Trilogy at the Polo Club WOW founder Janet Malek at jmalek8461@yahoo.com. Editorial by Lauren Del Sarto.

Action Steps for Total Well-being I don’t know about you, but I’m looking forward…