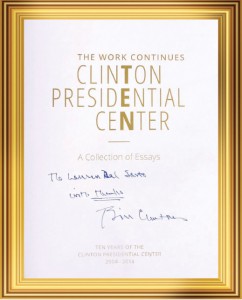 Last October I was extremely honored to have been asked by the Clinton Foundation to write an essay on behalf of the Coachella Valley about President Clinton’s impact in this region.

Worldwide essays were compiled in a book presented to the President in celebration of the 10th anniversary of the Clinton Presidential Center in Little Rock, Arkansas.

I was even more honored to receive a personal thank you from the President for this contribution, which follows. I can only hope that I represented our community well.

A Wave of Wellness Washes Over the Desert

The Coachella Valley is often described as ‘Heaven’s waiting room’ or ‘martini mecca’ by outsiders, but those in our natural health community have always considered it a place of healing.

Upon moving to the desert eight years ago, I was surprised to learn just how advanced the practice of natural modalities was locally, working in the shadow of a vast and well-respected medical community. Then I began to see where the two were converging and decided there needed to be a medium to promote their union, and the practice of ‘whole person’ care. Desert Health®, News from the Valley’s Integrated Health Community was born and immediately embraced by the industry – including the valley’s major hospitals which also saw wellness and integrated care as the medicine of tomorrow.

Desert Health® encourages readers to take their health into their own hands. We feature educational information by local practitioners from top medical and naturopathic doctors to yoga instructors and acupuncturists. But most importantly, we celebrate the individuals and organizations throughout the valley practicing and promoting positive health.

Two years into our venture, a similar effort of greater magnitude came to town: President Bill Clinton and the Clinton Health Matters Initiative (CHMI). They started at the top with government officials, educators and industry leaders and challenged the Coachella Valley to rise to the occasion as the first region to prove that systems can be instilled in a community to change the overall health of that population.

Meetings were held, a blueprint of action was created, and excitement grew. All of a sudden the conversation of health was propelled to the forefront in the Coachella Valley, and everyone was asking, “How can I get involved?”

There are only a handful of people in the world who could unite an entire community and instill the confidence that an effort of this magnitude – which aims to alter human behavior – is indeed possible. President Bill Clinton is one of them. The positive energy, worldwide respect and influences, and the long list of accomplishments demonstrate a human being who truly cares about making the world a better place for all. And that dedication – along with the never-ending determination to try – is contagious. 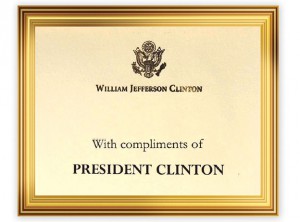 The Coachella Valley has risen to the challenge. In our coverage of the progress and accomplishments of the CHMI over the past two years, I have yet to hear “It can’t be done.”  Our community embraced the effort creating unprecedented change and results that have surpassed even the Foundation’s greatest expectations. “We are constantly in awe and inspired by the cohesion that you have around this work,” stated CHMI CEO Rain Henderson. “You all have fabulous day jobs, and a lot that you are doing, and the amount of energy and investment you have committed to working with us on this initiative is truly special and unique.”

With the help of the Foundation’s Alliance for a Healthier Generation, all 80 of the valley’s public schools have joined the effort. Cafeteria and vending machine foods have been improved; wellness committees of both students and staff have been formed; early morning running clubs and after school activities are taking place (being led by volunteer teachers and parents); and health fairs and school vegetable gardens are being incorporated. A few of our local schools were even honored nationally for their exceptional efforts.

Thanks to President Clinton’s vision, wellness is everywhere in our community. The La Quinta Senior Center will soon re-open as the La Quinta Wellness Center, and the City of Palm Springs was recently awarded 5 gold medals in First Lady Michelle Obama’s Let’s Move! Initiative. Over the Halloween weekend, the second annual Run with Los Muertos 5K race will take place on Dia de Muertos in Coachella. Embracing the local culture, valley native Tizoc DeAztlan launched this event to encourage the area’s large Hispanic population to not only celebrate those who have passed, but also to celebrate life. Last year, he saw many first-time runners shedding tears of joy and exhaustion at the finish line, so he created a free six-week training program leading up the event called “Por Vida!”. He enlisted the help of local naturopathic doctors to work with runners, and encouraged high school student, Johnny Flores to blog about his experience. “My friends and family think I am crazy,” he told us; his blog was aptly entitled “Not Giving Up!”

Our most significant achievement may be the successful funding of CV Link, a 50-mile multi-use path that will connect the valley from one end to the other offering a scenic and auto-free place to bike, run, jog, and inline skate. While plans for the project preceded the CHMI, incorporation into the blueprint has generated additional support, team work, and funding. $85 million of the estimated $100 million budget has been raised, and a 2016 ground breaking is planned.

President Clinton also reminded us not to forget about those in our community with the greatest needs. CHMI strives to address disparities for all residents and to bridge the gap. Playgrounds and wellness parks have been constructed in the east valley and a “Clean Up Coachella” day with Chelsea Clinton had a lasting impact on all. Desert Health® pledged to help increase the number of medical volunteers at the valley’s only free medical clinic and our media campaign has helped increased staff, and thus the number of patients that Coachella Valley Volunteers in Medicine can see.

The Foundation also encouraged non-profit organizations such as FIND Food Bank and Hidden Harvest to join forces to reach a greater population; their joint effort was rewarded by a significant local grant, and more of our valley’s hungry receive fresh fruits and vegetables.

Many of these community efforts, large and small, would not have taken place without the vision, support and facilitation of the Clinton Health Matters Initiative.

On behalf of the Coachella Valley, I want to thank you, Mr. President, and your tremendous team at the Clinton Foundation for guiding us down this path of enhanced health and wellness. Thanks to your support and encouragement, we are doing it for ourselves, and for the greater good of our community. Desert Health® will continue to publish our achievements in an effort to inspire others to take part.

You can count on us as your “model community.” Our work will continue, and we promise not to let you down.