Some forms of exercise have deep historic roots; Pilates is one of them. With a rich background, this practice of movement touches a special place in one’s heart.

In 1925, Joseph Pilates immigrated to the United States, founded a studio and coined his approach to exercise “contrology,” which later became known as Pilates. He taught many students, including dancers and patients who needed rehabilitation. Pilates includes intricate concepts related to breath, alignment of the spine, and strengthening the abdominal muscles.

In this same year, 1925, Millie White was born. She now practices Pilates with instructor Sean Bergara at a studio in Palm Springs. For 92 years, Pilates has stood the test of time and so has Millie White. 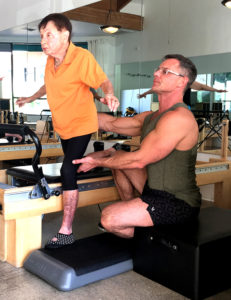 The day I met Millie, she was about to start a class. I was awestruck by her ability to move her body with awareness. She started with footwork on a machine called the reformer, which encourages foot articulation and progressed to bridging her hips and segmentally lowering her spine. Millie then placed her feet in straps to perform leg circles and finished with “Eve’s Lunge,” moving the carriage of the reformer in a lunge with focused balance.

Millie has been practicing Pilates for four years. She is thankful for the improved range of motion and stretch she received from this practice. When asked who provides her inspiration, she paused, stating that she has been motivated by many people in her lifetime. But she was clear that her current inspiration is her teacher, Sean.

There is reciprocal inspiration between Millie and Sean. After Millie graduated from college, she worked as a physical education teacher when she adopted the motto “just keep moving.” Millie sees Sean as the teacher she used to be, helping others through exercise; Sean, the epitome of health, hopes to achieve what Millie possesses as he ages. Millie envisions herself as a healthy 92-year-old. This unwavering vision of health and her mantra to keep moving are a steadfast commitment to personal well-being.

My journey with Pilates has spanned the same stretch of time as Millie’s. Practicing for four years has enhanced my development towards better balance and strength. Just recently, my 15-year-old daughter, Bella, has taken an interest in joining me. Bella immediately appreciated that Pilates focuses on intricate movements, each one small but tremendously effective.

After a little reticence, she also revealed that I am an inspiration to her. The interesting fact is that my daughter is the same for me. We hold reciprocal inspiration toward each other just as Millie and Sean do.

Pilates is a deep-rooted form of movement spanning generations, allowing for the inspiration of progress between people from all walks of life – and across all generations.