The Advancement of MRI for Detection, Localization and Treatment

This literature review is an important update on the role of magnetic resonance imaging (MRI) in prostate cancer diagnosis and treatment. 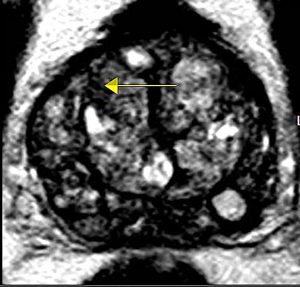 Anatomic MRI image of the prostate with arrow indicating abnormality

Over the past ten years, physicians and researchers all over the world – and right here in the desert – have been exploring new ways to detect, diagnose and treat prostate cancer using MRI. A group of investigators in the UK conducted a clinical trial using MRI before biopsy and presented their preliminary results at the American Society of Clinical Oncology meeting this year (ASCO 2016). 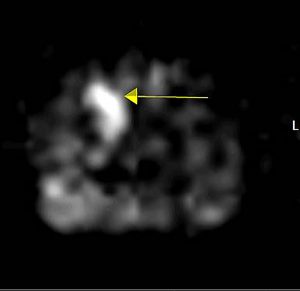 The study is called the PROMIS study, Prostate MR Imaging Study: a paired validating cohort study evaluating the role of multi-parametric MRI in men with clinical suspicion of prostate cancer. It is very promising indeed! It demonstrated the strengths of doing MRI to exclude, or to rule out clinically, significant prostate cancer. This translated to the improved detection of disease that really mattered and needed to be treated. It also led to the avoidance of biopsy in men who had no suspicious imaging findings. This has great potential to reduce cost of procedures and risks such as infection or other undesirable side effects. 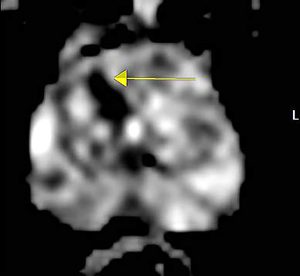 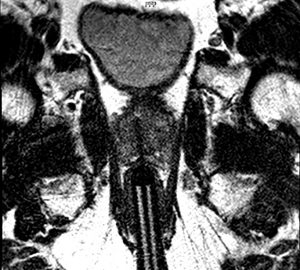 MRI is helpful because it can demonstrate the anatomy of the prostate gland and any possible areas of functional abnormality. Areas of infection, inflammation or malignancy have imaging hallmarks that a radiologist can identify. They can see how big the prostate is and what it looks like inside as well as how the tissue behaves. Any regions deemed suspicious can then be biopsied. In this way MRI can help to distinguish clinically significant prostate cancer from prostate cancer that is clinically insignificant, i.e., those cancers not warranting any treatment.

Radiologists and urologists working together can put a man on the best path to treatment or surveillance when armed with information and good communication tools.

These images of prostate glands show large tumor-suspicious regions. This area can be seen a number of ways depending on the settings programmed into the scanner. These parameters are adjusted to exploit tissue characteristics or highlight areas of abnormality so the radiologist can sort out the anatomy and function of the gland.

Just as phones, computers and cars have evolved over the past few decades, prostate cancer detection has improved through judicious use of a combination of screening techniques, imaging strategies and multidisciplinary collaboration.