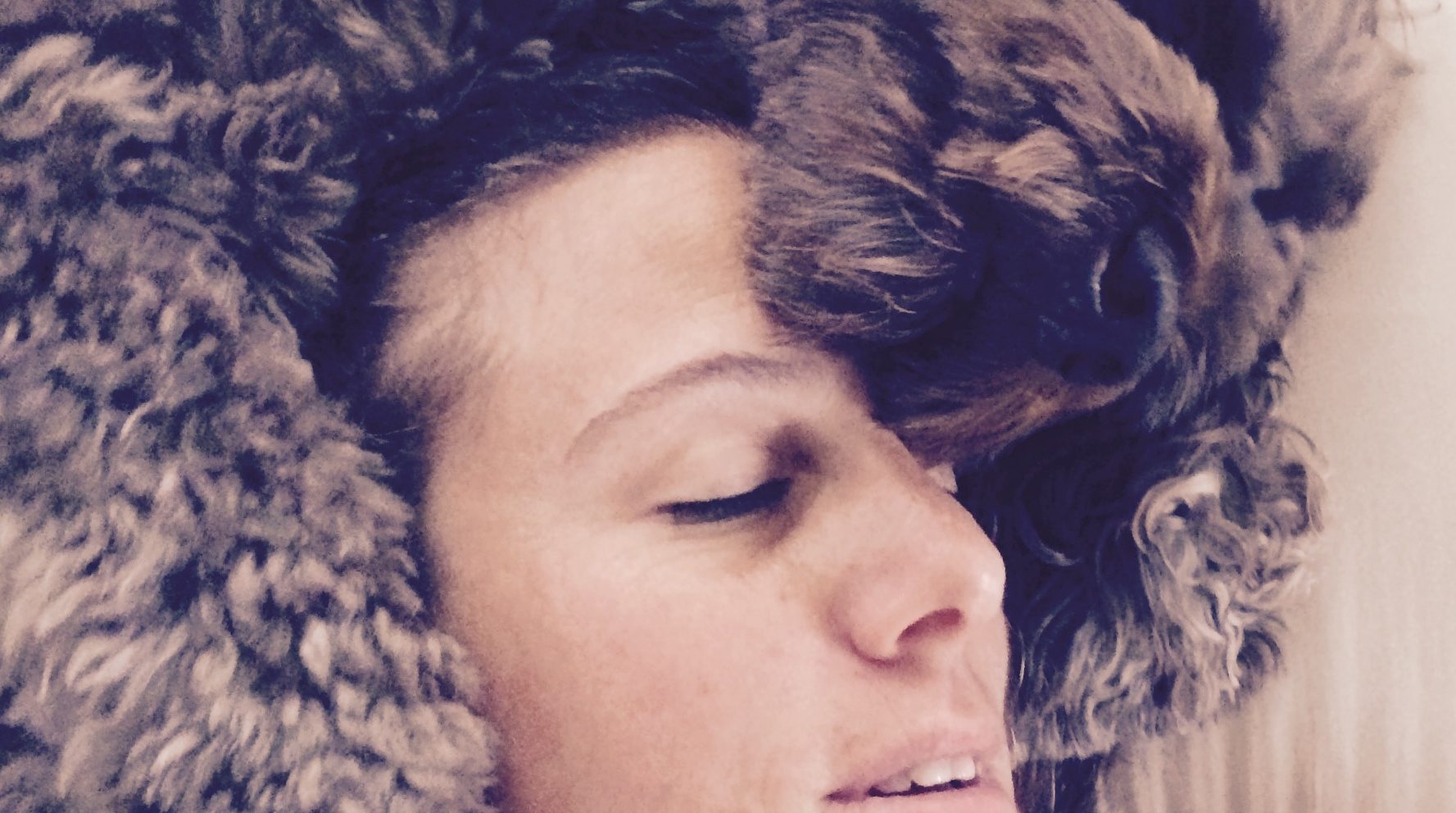 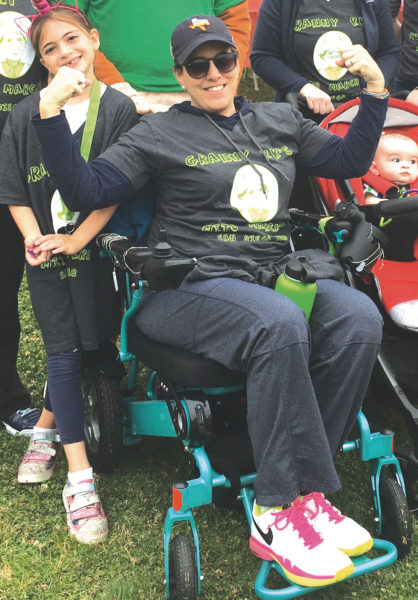 Karen was a vivacious young woman living the dream. An avid tennis and softball player, she loved doing yoga, had a private psychotherapy practice, and spent time between Redondo Beach and Palm Springs with her husband and their labradoodle Dood.

Her family lived in Texas but her beloved sister, Stephanie, a pediatric gastroenterologist, moved with her family to Redondo in 2012, close to Karen for the first time since high school.

That same year when Karen was just 42, things suddenly started to change. She came down with an upper respiratory infection and debilitating fatigue. Antibiotics only made things worse and her symptoms continued to progress. Within a year, she could hardly walk, her heart would race every time she moved. She had digestive issues, trouble breathing, suffered memory loss and word confusion, and was losing muscle control with a dragging leg and
drooping eyes.

Neurologists ruled out MS or a brain tumor; her sister suspected myasthenia gravis (MG), a neuro-muscular auto-immune disease, but a blood test ruled that out as well, leaving Karen, her friends and family baffled. Sadly, many doctors made her feel that it was all in her mind or refused to take her case. 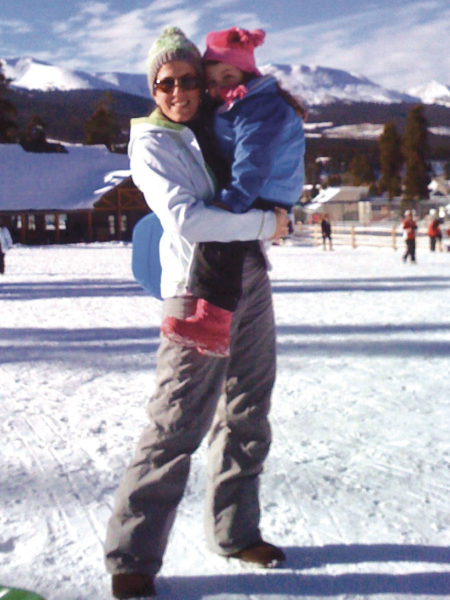 Athletic Karen carrying her niece in her healthier days.

Her condition progressed to the point that she could barely hold up her head and any exertion made it worse. “I felt like I was slowly dying,” says Karen, who worked hard to keep her emotional state intact and leaned on her sense of humor to help get her through.

Two years after the onset of her symptoms, a doctor recommended she try an intravenous aminosyn therapy. An online search led her to the Live Well Clinic, a naturopathic center in La Quinta owned by Sonja Fung, ND. Coming from a western medicine family, Karen was apprehensive, but had seen over seven medical doctors and nothing was making her better. 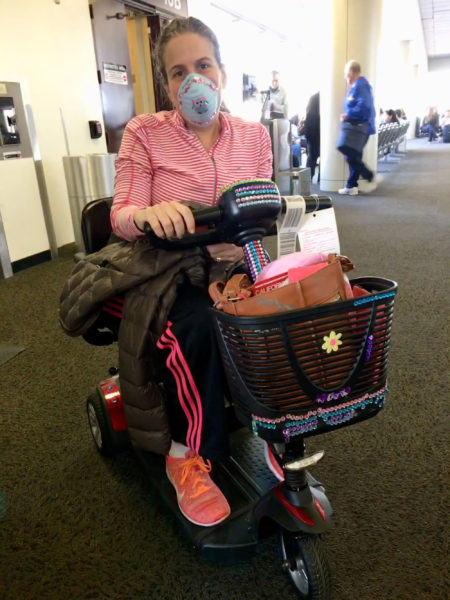 “When I met with Dr. Fung, she had already spoken to my infectious disease doctor and had reviewed my case in detail,” says Karen. “She said she thought she could do more than just the aminosyn, but I was skeptical.” Little did she know this meeting would help save her life.

Dr. Fung made a specific IV formula for Karen based on her symptoms and compromised immune system and it promptly worked to normalize her white blood cell and neutrophil counts. Karen’s infectious disease doctor at Stanford was astounded and asked Dr. Fung to send him blood samples to study. He had never seen anyone in Karen’s condition normalize immune counts like this.

“Before Karen came in for her initial consult, I knew we had a very difficult case on our hands and that we had to look outside the box if we were to make any progress,” says Dr. Fung. “In reviewing her case, I knew she already had a dysfunctional digestive system and was not absorbing her essential nutrients. Giving IV amino acids would only be one set of the many nutrient cofactors needed to jumpstart her system. She needed all the other cofactors as well, such as B vitamins, minerals, and key antioxidants, such as vitamin C, CoQ10, and alpha-lipoic acid to build her mitochondria (responsible for creating energy) and her white blood cells. I knew that if I could replete her with all of the building blocks, and work on her diet and digestive function, that this would be the best and crucial first steps.”

Karen continued with the IV therapies twice a week and soon added ozone therapy. “That is when I became a functioning human being once again. I could hold my head up and my legs stopped feeling like rubber and lead. After about six months, I could walk a couple of blocks and was able to return to work part time. 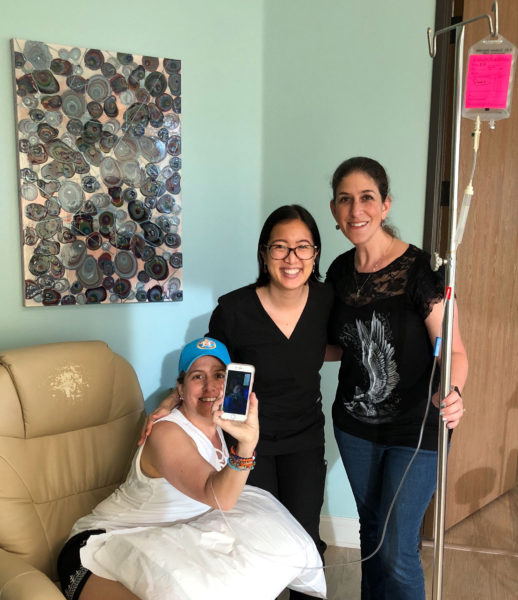 Dr. Fung methodically tried adding one therapy at a time to see what worked and encouraged Karen to follow an anti-inflammatory diet. “I was a naturopathic doctor’s nightmare existing on soda, pizzas and other unhealthy food – especially sugar! But I was ready to do everything I could.”

After working with Dr. Fung for two years and sustaining her progress, a muscle biopsy finally delivered an accurate diagnosis of mitochondrial myopathy, a debilitating and deadly disease primarily found in children which is rare in adults. With mitochondrial disease, minimal energy is produced and every muscle in your body (including your heart, digestive organs and blood vessels) is compromised. Karen’s sister, the pediatric gastroenterologist, had also suspected a mitochondrial disease and, once MG was ruled out, was able to send Karen to specialists to whom she refers her young patients.

“I like to say that I’m one of Jerry’s Kids,” she jokes as mitochondrial disease is more commonly known as a form of muscular dystrophy. She now sees mostly pediatric doctors for her condition. “Their waiting rooms are a lot more fun; they always call me in just when the Disney movie is getting really good.”

There is no cure and no specific treatment for mitochondrial myopathy, and her condition still baffles many western doctors who continue to question her treatment choices. “This is a progressive and degenerative disease. Before I found naturopathic medicine, the disease was progressing very quickly. What Dr. Fung did significantly slowed the progression and significantly improve my quality of life.”

In October, she received cord blood stem cells (extracted from placenta post-birth) in an effort to regenerate her deficient cells. They were donated by her step-daughter, step-son-in-law and new grandson, which she considers very, very special. “So now we are all blood relatives!”

“We have to get the word out about naturopathic medicine and an integrative approach to health,” says Karen. “There are too many people who have no idea that there are resources which can help them – and in many cases even save their life.” 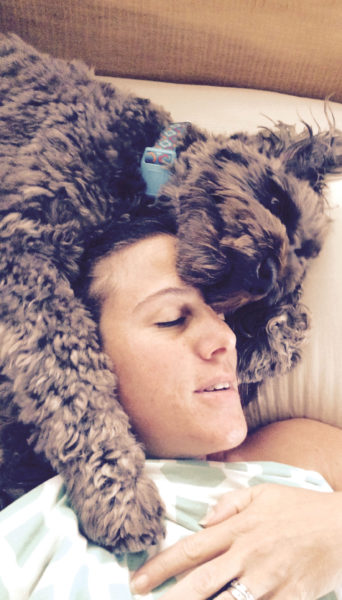 On especially bad days, Dood will climb on Karen’s pillow and give her a hug.

She has learned a lot from her condition and that of others she meets in Live Well’s IV room. “Most of the people getting IVs have serious health conditions like Lyme disease, fibromyalgia and cancers, some deemed terminal, but we all have a special understanding of what it’s like to be suffering with chronic illness and Dr. Fung and Dr. Myers are doing a lot for us. We all support each other – especially when times get tough.”

She describes one patient with a rare stage 4 lung cancer (non-smoking related) who at 49 was given six months to live. Working with Dr. Fung, two years later she is cancer free. Her doctor at UCLA said he has never had anyone with that type of cancer survive more than six months.

Dr. Fung took a very skeptical western medicine family and turned them all into believers, says Karen. Her sister had a torn disc which western medicine protocol didn’t help. She tried PRP with Dr. Fung and was able to start exercising again.

Karen’s father was diagnosed with stage 4 pancreatic cancer and became incapacitated after his first three rounds of chemo. Dr. Fung recommended he try 1,000 mg of the herb curcumin three times a day, but his oncologist was reluctant. Karen’s sister stepped in to consult with his doctor on the science behind the recommendation, and after his next treatment, Dad was back to work. He did not experience side effects from chemo again, other than a little fatigue, and added more supplements recommended by Dr. Fung. Two years later, he is happy and still with us. 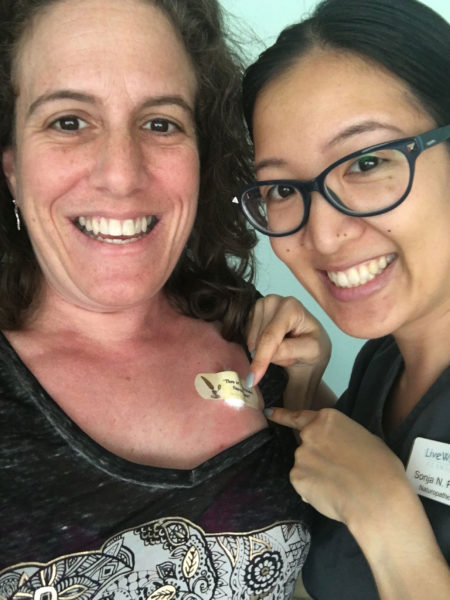 Karen continues on an evolving protocol of medications and supplementation as she and her team – her neuromuscular doctor, sister Stephanie, and Dr. Fung – continue to learn what others are doing for mitochondrial disease. She is also hoping to get into a third round clinical trial that she says would be “like winning the lottery.”

Karen also emphasizes the importance of the mind-body connection for healing. “If I had fallen into any sort of depression during this time, I don’t believe I would have survived. If I had an emotionally down day, the next day, I would be crippled.” She made a conscious decision to turn things around, finding gratitude in the midst of fear and uncertainty. “Instead of focusing on what I don’t have, I focus on what I do have – a great family, a loving pup, and naturopathic medicine that is helping to save my life.”

“Karen is an inspiration to us all,” adds Dr. Fung. “She continues to amaze me with her tenacity and the power of positive thinking. Her energy and humor brighten up the IV room and (she) draws out even the shyest patients. She has made some life-long friends in that room and at the clinic, and we are so blessed that she continues to be a vocal advocate for her health, mitochondrial research, and naturopathic medicine.”

Action Steps for Total Well-being I don’t know about you, but I’m looking forward…