Roll Out to All Valley High Schools in the Works

La Quinta students Ashley-Anne and Savie Hobbins come from a family with deep roots tied to the American Red Cross (ARC) – six generations and over one hundred years – starting with their great, great, great grandmother who established the first ARC chapter in the Midwest in 1909. So it is no surprise that both girls are studying to become registered nurses, are part of La Quinta High’s Medical Health Academy, and have started an ARC Club chapter of their own.

Ashley-Anne and Savie were born in Paris, France and recently moved to the Coachella Valley from Wisconsin where they founded their Wisconsin ARC chapter’s first K12 ARC club. Through the club, students work with the local Red Cross chapter and learn many valuable medical and emergency skills. The students organize blood drives, help U.S. military members, and work to eradicate childhood diseases such as measles. They can also become ARC lifeguards or trained instructors. 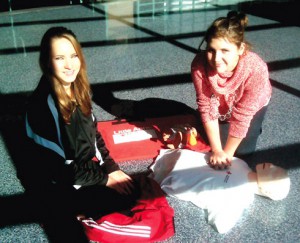 Upon arriving in the Valley, the sisters saw the opportunity to bring this valuable resource to their school and the community. “Before moving to La Quinta from Wisconsin, we started to correspond with the Red Cross about setting up the Valley’s first ARC club,’’ states Savie. After much effort and coordination, the La Quinta High Club was approved unanimously in a November 2012 Board of Education vote.

But the girls didn’t stop there. They then developed the ‘ARC Club Network Project,’ which they envision will link all high schools within the Desert Sands, Palm Springs and Coachella Valley districts together in a unified ARC Club network. “We developed our ARC Club La Quinta as a ‘club model’ that could be emulated by other high schools within the Coachella Valley school districts for a potential of 15 clubs total,’’ states Ashley-Anne.

‘’We developed the project as a way to link humanitarian, health professionals and medical health partnerships for the benefit of the community and to support Red Cross efforts,’’ states Ashley-Anne. Their enthusiasm is catching. In January, ARC Club La Quinta voted to form the ‘ARC Club Network Project Committee’ to oversee club expansion and the formation of the network.

ARC clubs are for students committed to making their school, their community and the world a better place. They acquire skills that build a solid foundation of personal tools important to succeeding in college and any number of future careers. “Being ARC volunteers comes naturally for me, my sister and our nearly 100 club members. When we moved here, we had no idea of the impact we might have,” says Ashley-Anne. With the launch of the Clinton Health Matters Initiative (CHMI) locally, their timing is perfect. The girls plan to submit their project as a CHMI Pledge to improve the overall health of our community.

Savie adds, “Our club is so excited about this project and we very are proud to carry on our family’s legacy.”