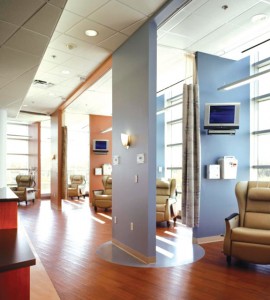 Infusion Centers are a growing trend.

Infusion therapy is the intravenous administration of medication. IV medications are generally prescribed by a physician when a patient’s condition or disease state cannot effectively be treated by conventional therapies or oral medications. Many medications are designed to be delivered intravenously as their only means of treating a disease. 1 So it’s not surprising that IV infusion centers are appearing nationwide–including here in the desert.

I became aware of IV infusion centers recently when a family member contracted a severe case of cellulitis, an infection just under the skin. After several rounds of oral antibiotics, her condition did not improve, so her primary care physician prescribed 30 days of intravenous antibiotics to be administered at an IV infusion center.

As recently as the 1980s, patients receiving infusion therapy had to remain in the inpatient hospital setting for the duration of their therapy. Heightened emphasis on health care costs, as well as developments in the clinical administration of the therapy, led to strategies to administer infusion therapy in alternate settings. For individuals requiring long-term therapy, inpatient care is not only tremendously expensive but also prevents the individual from resuming normal lifestyle and work activities. 2

Specialty medications infused in a hospital or long-term care facility cost approximately twice as much as those administered in an infusion center due to the “hotel cost” and associated overhead. 1

“IV Centers save the country millions of dollars annually by keeping patients out of hospitals,” states Hany Benjamin of River’s Edge Pharmacy whose company provides patients and centers with infusion medications. “They are supported by the government, insurance companies and hospitals, which often have in-house centers.”

The number of specialized IV medications in the health care marketplace has surged in the past 5-10 years.1 According to www.clinicaltrials.gov, an estimated 280+ infusion drugs are in Phase I/II development, and almost 100 of those infusible drugs are in Phase III review. These new medications will require a delivery model that is patient-centered, safe and cost effective. 2

The average cost of a hospital stay is $1,500 per day without medications whereas the per day cost of an IV center is $150 with medications. A four-day cellulitis treatment costs $600 in an IV center compared to $7,180 in a hospital resulting in a per-patient savings of $6,580. 3

Below is a chart of five infusible drugs and the cost of therapy by site.

How does it work for patients?

When prescribed treatment at an infusion center, patients have many options, adds Benjamin. “Medications can be picked up or sent directly to the center. We offer free delivery or shipping, and working with local agencies we can even have medications delivered to the home and administered by a nurse.”

Centers are staffed by qualified nursing teams and overseen by a medical director. Comfortable recliners are offered and the ambiance offers a more positive experience than that of a busy hospital environment.

On her first few trips, our family member felt odd sitting in a room with a bunch of other people also receiving IVs. But after a while, she came to appreciate the comfortable surroundings, immediate care and the camaraderie developed among all the familiar faces.

Considering cost savings and patient comfort, IV infusion centers are a win-win for the national economy and local residents.