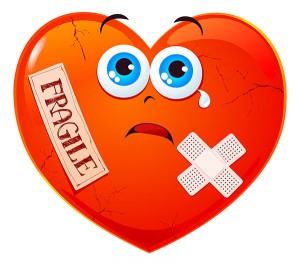 Emotions are a beautiful part of human nature. Our ability to feel makes us perfectly human! Stress, from all sorts of challenging situations and events, can significantly shorten your life, particularly in the form of a heart attack. Emotions such as depression, anxiety, anger, hostility, as well as social isolation, significantly affect heart health.

Negative feelings start in the brain, but they quickly engulf the entire body. The brain triggers a cascade of chemicals and hormones that speed the heart rate, quicken breathing, increase blood pressure, and boost the amount of energy supplied to muscles. All of these changes enable the body to respond to an impending threat. Unfortunately, the body does a poor job of discriminating between grave, imminent dangers and less momentous, ongoing sources of stress. When the fight-or-flight response is chronically in the “on” position, the body suffers. This chronic stress response can occur if the body is persistently exposed to stressors that overwhelm its adaptive ability. Think of it as if the body is in a constant state of “short-circuiting.” Hormones and other substances released by the body under stress affect the supply of blood to the heart muscle, increase the clotting potential of the blood and limit blood flow in the vessels around the heart, which may result in the build-up of a blood clot. Also, long-term mental stress appears to stimulate the body’s production of LDL and triglycerides, which interfere with blood pressure regulation and activate molecules that fuel inflammation.

There are several situations that can trigger heart-related problems.

Stress reduces heart rate variability, an objective, accurate and sensitive measure of coronary disease and a powerful predictor of sudden death. Stress reduces the ability of your immune system to fight infections. Infections are a causal factor in inflammation as well as destabilizing plaque. Severe stress can cause a heart attack in the absence of significant blockage in the arteries. Stress also causes atrial fibrillation, the most common sustained arrhythmia, as well as ventricular fibrillation, the leading cause of sudden death.

Depression and heart disease is a two-way street. Depression appears to promote heart disease, but it can also result from a heart attack. Studies prove that people who are depressed are about twice as likely to develop coronary artery disease and that people who already have heart disease are three times as likely to be depressed as other people. One depression study followed 218 patients for eighteen months post MI (heart attack) and found that 75% of the post-MI deaths were related to depression in the next six months. This was independent of other risk factors.

Broken Heart Syndrome is yet another source of heart problems. Yes, there is a medical condition called Stress Takotsubo Cardiomyopathy, which is a true condition in which intense emotional or physical stress can cause rapid and severe heart muscle weakness (cardiomyopathy). This “myocardial stunning” is due to severe left ventricular contractile dysfunction that frequently mimics a massive heart attack. The condition can occur following a variety of emotional stressors such as grief, fear, extreme anger and surprise. It can also occur following numerous physical stressors to the body such as stroke, seizure or difficulty breathing.

Probably the most disturbing correlation is between childhood abuse victims and the incidence of heart disease. Men who experienced sexual abuse in childhood have three times the chance of suffering from a heart attack than men who were not abused during childhood. This was determined after adjusting the study for race, obesity, physical inactivity, education level, smoking, diabetes, and household income.

If someone is a “hot head” studies tell us they are nearly three times as likely as a level-headed person to have a heart attack. Researchers at the University of North Carolina measured the anger levels of nearly 13,000 men and women and then tracked them for six years to prove this correlation.

Financial stress is often a potentiator of heart attacks. Incidences rose as the stock market crashed, according to a 2010 report in The American Journal of Cardiology. Researchers at Duke University reviewed medical records for 11,590 people who had undergone testing for heart disease during a three-year period and then compared monthly heart attack rates with stock market levels.

Earthquakes also trigger stress-related heart problems. Sudden cardiac deaths rose sharply immediately after the 1994 earthquake in the Los Angeles area, and hospitalization for heart attacks jumped on the day of the 1995 temblor near Kobe, Japan.

We can all likely identify with at least one of these scenarios in our own lives. Although circumstances are often unavoidable, it is how we choose to deal with them that ultimately determines the health of our heart. In general, practice giving and receiving love; your heart will thank you in more ways than you think.

Dr. Nicole Ortiz is a primary care Naturopathic doctor with a passion and expertise in preventative cardiology at Live Well Clinic. For more information on in-depth cardiovascular lab and genetic testing, contact us at 760-771-5970 or at www.livewellclinic.org.

Taking Time to Paws and Reflect I was all set to theme this article, “Is there…

Biofeedback: A Non-Invasive Intervention The Centers for Disease Prevention and Control (CDC)…