Found in: Through the Generations | September/October 2012

SongShine: Gaining Vocal Strength Through the Power of Music

Music is an integral part of our human experience. Our brains have processed and learned from the natural musical tones and rhythms around us—nature’s music—for as long as man has walked on this earth. 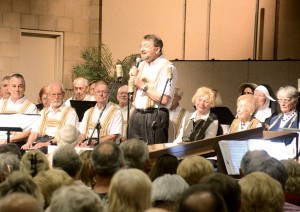 Wayne Curtis sings to a packed house in the 2012 SongShine Celebration featuring music from The Sound of Music.

Believing that music is life-giving and that humans are hard-wired to benefit from it, SongShine, a music-based speech and voice therapy program, was launched in 2006 as a pilot study at Eisenhower Medical Center for the Traub Parkinson’s Center. SongShine’s founder, Ruthanna Metzger, recognized that music, especially singing, was scoring high marks with neuroscientists and neurologists because of a process known as neuroplasticity, which helps rewire the brain.

“The organizational aspects of speech are in the brain’s left hemisphere, which often ceases to send clear speech signals when damaged by disease or trauma,” states Metzgar, “detail, volume, and pace of speech become compromised.” Music, however, is distributed throughout many areas of the brain. Musical therapies like SongShine can help the brain “switch channels,” finding alternate pathways for better speech function.

According to Dr. Neil Hermanowicz, neurologist at the Traub Center, a study of music therapy as a form of treatment for Parkinson’s disease was published in 2000 by Claudio Pacchetti, MD and his colleagues at the Parkinson’s Disease and Movement Disorders Centre in Italy. Researchers found that music therapy, including “choral singing, voice exercise, rhythmic and free body movements, and active music involving collective invention” produced measurable improvements in the participants’ mobility, happiness, and overall sense of quality of life. 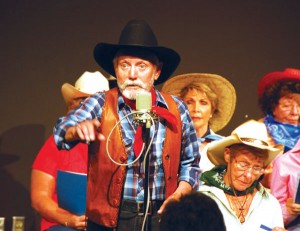 SongShine offers an opportunity for people to improve both their speaking and singing skills in an atmosphere that lifts spirits, touches hearts, releases memories and creates a strong sense of community. Wayne Curtis, PhD, of Palm Springs, says the program brought him back to life. He developed Parkinson’s in the thirty-fifth year of his career as a Clinical Psychologist. He had been a soloist since his teens, starring in high school musicals and working his way through college and graduate school singing at the professional level. “I always dreamed that when I retired, I would have nothing to interfere with my singing,” said Curtis. But the closer he got to retirement age, the more he began to notice the early symptoms of the disease: the expressionless face, the tremors, the rigidity, and the lack of enunciation in speech. “I was embarrassed and ashamed, so I occupied myself with hobbies that did not require public appearances. I had decided I would never sing again.”

After five years, Curtis heard about SongShine’s success in helping people with strokes and Parkinson’s rediscover their voices. He decided to give it a try. “The minute I walked into the room, I knew I had found something special. The atmosphere generated by the director, teachers, and other participants that made me feel I had come home.”  Since joining the class, Wayne has made a CD entitled I’m Still Me (in spite of PD) and makes guest solo appearances throughout the Valley.

Geoffrey Webb of Palm Springs, agrees, “I am eighty-one years young and have spent most of my life working in the theater. For the past six years I have done very little and with the onset of Parkinson’s, my voice has suffered greatly. By attending SongShine, my voice has regained clarity and volume. Not only is the class beneficial for my voice, it is food for my soul.”

SongShine takes place at Palm Desert Community Presbyterian Church on Hwy 74. Prior singing experience is not required and all are welcome.

6 Responses to “SongShine: Gaining Vocal Strength Through the Power of Music”

Soul-full Solutions for Time Well Spent Time…We can’t stop the clock, but if we recognize…