Over 2,300 players from around the globe will descend on the world-class venue which has also increased its number of pickleball courts from 45 to 49. Players in approximately 140 different divisions will play 4,000 matches over 8 days.

The Tennis Garden’s Pickleball Nationals Event Director Fred Hartzman tells us that the club listened to feedback from all who attended last year and a few site tweaks have been implemented to make both the player and spectator experiences more positive. The overall site has been condensed with entertainment, food, and beverage venues now closer together, providing easier access. Additionally, all price points for entry will be granted Championship Court access. Event sponsor Margaritaville has also grown their presence offering two social sections: the Margaritaville Lounge as part of the VIP package and the 5 O’clock Somewhere Bar open to all.

Pickleball is enjoying huge growth in both amateur and professional play. Here in the desert, the number of pickleball clubs has grown exponentially with most private clubs, including Big Horn, adding courts. Public courts are also available at Demuth Park in Palm Springs, Freedom Park in Palm Desert, and Fritz Burns Park in La Quinta.

The National Championships reflect that growth as this year’s tournament is expected to be the largest in the world with 2,300 players according to Hartzman. The Indian Wells tournament will also offer the largest purse of any tournament with $80,000 to be divided among winners throughout the levels.

The USA Pickleball National Championships will be held November 2-10 at the Indian Wells Tennis Garden. Tickets are available from $5 for general admission to $500 for the VIP Guest Experience Package. All price points enjoy access to the Championship Court. For details and more information visit www.usapickleballnationals.com. 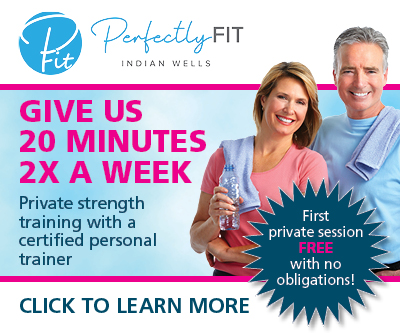 Better Together Many Americans have developed unhealthy coping…

Returning to the Gym Safely It’s been a very challenging time for our world,…

The Back Nine The importance of fitness training has become wildly…