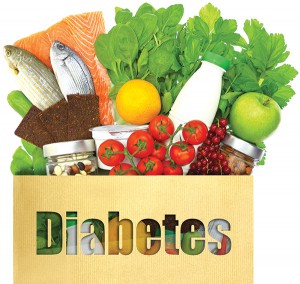 Diabetes mellitus is a group of diseases that have in common an elevated blood sugar. They are disorders of carbohydrate metabolism. The frequency of diabetes has increased exponentially since 1980 along with the increase in overweight and obesity, and emerging scientific evidence points to malnutrition (not the starvation type, but rather eating the wrong foods) as the dominant cause of diabetes. There is a genetic component to developing diabetes, but this is small in comparison to the impact of nutrition.

This article describes the impact of what we eat on the development of both type 1 and type 2 diabetes. Diabetes that develops during pregnancy, gestational diabetes, will be lumped with type 2 diabetes because they have essentially the same mechanisms that result in high blood sugar. The information in this article draws mainly from the work of two physicians, William Davis (Wheat Belly and Wheat Belly Total Health) and David Perlmutter (Grain Brain and Brain Maker).

As a group, the diseases of diabetes have a tremendous impact on the health of Americans causing heart disease, stroke, organ failure, blindness, neuropathy, dementia and premature death. Collectively we spend more money treating diabetes than any other group of diseases, including cancer and heart disease. Eliminating diabetes, or making it very rare, would be an enormous benefit to our collective health. This may seem far-fetched, but eliminating diabetes is easily within our reach. All we need to do is to eat the right foods.

Type 1 diabetes is one of many auto-immune diseases that rob us of our health. In the case of type 1 diabetes, we form antibodies that attack and destroy the cells in the pancreas that make insulin. Without insulin we cannot metabolize sugar and we die. All type 1 diabetics must take insulin to live. The complications of type 1 diabetes even treated with insulin include reduced circulation to many parts of the body, blindness, kidney failure, neuropathy and heart disease. Without optimal treatment, people with type 1 diabetes die prematurely.

What causes us to form these auto-antibodies that destroy our own tissues? For years this was thought to be due to viruses that reprogram our DNA. We now know that “leaky gut” from food substances, mainly proteins, which get into blood stream are considered foreign by our immune system. We form antibodies against these proteins, a type of inflammatory reaction, that also attack and destroy our tissues, in this case the insulin-making cells of our pancreas.

Where do these inflammatory proteins come from? Mainly from eating grains such as wheat and other foods made with flour. Grains such as wheat and oats contain prolamin proteins, such as the gluten protein complex, that are inflammatory to the human body and increase intestinal permeability or “leaky gut.” It appears to be that the entire spectrum of auto-immune disease: hypothyroidism, rheumatoid arthritis and other inflammatory arthritis, multiple sclerosis and other neurodegenerative diseases, and many allergies are the result of eating inflammatory proteins. These diseases are for the most part unique to humans and are not seen in the animal kingdom.

Body fat is much more than the storage of energy. Fat is hormonally active in the body and causes inflammation and changes in carbohydrate metabolism. While genetics play a role in susceptibility, there is a level of body fat that would result in almost everyone developing type 2 diabetes.

What causes increased body fat? We now understand it is not from the fatty foods we eat. In general, fats satisfy us and reduce hunger. Increased body fat comes mainly from eating carbohydrates — grains, sweets and alcohol that drive up hunger and cause us to eat more. Carbohydrates and fats are energy foods and the body will try to use the carbohydrates first. All the excess carbohydrates we consume that are not used for energy are stored as body fat through a mechanism called lipogenesis.

Carbohydrates are sugars and starches and come mainly from grains and sweets. Starches such as grains are simply chains of sugar. The amount of sugar in a carbohydrate food is called the glycemic load. It turns out the grains such as the wheat in bread, muffins, cookies, cakes and pizza crust have the highest glycemic load, along with sweets such as ice cream.

During pregnancy women eat much more and if excess carbohydrates are consumed, gestational diabetes is often the result, putting the baby and the mother at risk.

You are what you eat

This old phrase has new meaning now that the gut microbiome, the 100 trillion organisms in our intestines that determine much of our health, is being understood. Eating the whole foods of nature — nuts, vegetables, fruit, seeds, healthy fish and meat – results in a healthy gut flora and healthy intestines.

Diabetes would be very rare if this is all we ate. Inflammatory proteins and excess sugars result in an unhealthy gut flora, leaky gut, inflammation and a staggering burden of disease, including the diseases of diabetes. Stop this malnutrition and we can stop diabetes.