When you read about the movement towards wellness, you may regard those taking part as an elite group. But they aren’t. They are individuals just like you and me who see the effects of diabetes, cancer, AIDS, and other chronic diseases and want to see change.

Those involved have a will to succeed and an open mind to collaborate with others for the greater good. They are starting small in their own homes, neighborhoods, governments and businesses, and building from there.

This is the premise behind the Clinton Health Matters Initiative (CHMI): creating systematic change for wellness at the community level which can be shared and duplicated in other communities. The Coachella Valley was the first region challenged with this undertaking and according to the President and his team, we are doing a very good job.

“I just want to encourage you, and to tell you that we go around country and talk about you,” President Clinton told the audience of local participants at the kick-off breakfast for the Clinton Health Matter Activation Summit in January. “People get discouraged and say ‘can we really do anything to create change?’ and we talk about you.”

He stated that three years ago, when his foundation was asked to get involved in the Bob Hope golf tournament, he knew he wanted to make a difference in the community. It wasn’t long before he realized that the Coachella Valley was one of the most economically and racially diverse communities in America with both the need and the resources to effect change. Since the CHMI launch in our valley, they have established a Blueprint for Action in Central Arkansas, Greater Houston, Northeast Florida and Mississippi.

Because of the progress and achievements we have made locally, he adds, people see that this works. “That if you get all the stakeholders together, they can make a difference.”

“That you did an assessment and identified the real needs of this community is important, and I am particularly excited about what you have done. I just want to encourage you, because what we are seeing in other communities is their local version of what you are doing, but you are way ahead of them.” 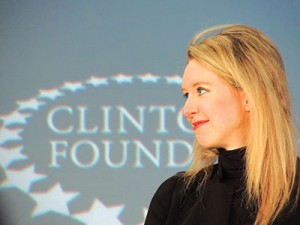 At 19, Elizabeth Holmes founded Theranos, a lab test company that is changing the industry.

Signs of progress spurred by both the CHMI and the local focus on wellness include the 2016 groundbreaking of CV Link, an alternative transportation and recreational path connecting the valley from end to end; the aggressive effort to end AIDS in our region through Get Tested Coachella Valley; the transformation of the La Quinta Senior Center into a Wellness Center for all ages focusing on mind, body and soul; and of course, the health and wellness message promoted around the Humana Challenge.

“What is obvious to me,” said President Clinton, “is that no matter how we reorganize the health care system, we have to involve real live human beings in every community in the country to take advantage of opportunities and to address the shortcomings faced by the people who live them.”

He believes that in the next 20 years there will be more and more potential for building a network of cooperation (“as in this room”) and building people-oriented systems from the ground up. “And I think you will see it all across America and all across the world, because we know that no matter what (national) health care system you design, the people who live in this valley are not the same as people living on the Pine Ridge Native American reservation in South Dakota or in Brooklyn or Queens.”

Once a year, those making an impact throughout the country, and those with the means to implement change on a large scale, are invited to attend the Health Matters Activation Summit now in its fourth year. Speakers share success stories on programs that are working, and attendees form small groups to see how they can help each other through challenges, or to collaborate on new ideas.

At this year’s conference, President Clinton stated that it statistically takes 17 years to see measurable change when an idea is implemented. Those at the Activation Summit don’t plan on waiting that long. They are breaking down the competitive barriers, operating with transparency, and working together to create change.

And the young “disruptive innovators” brought in to speak are proof that it can be done on a grand scale.

Elizabeth Holmes, who left Stanford at 19 to start Theronas, a company built on the belief that access to health information is a basic human right, is reinventing lab testing. Her Theranos Wellness Centers, which allow individuals and/or their physicians timely access to a full range of lab tests from a few drops of blood at unprecedented low costs, are now open in Walgreens in Palo Alto, CA and the greater Phoenix area. Holmes is considered a renegade, yet is supported by some of our country’s top strategists including former Secretaries of State Henry Kissinger and George Shultz, who sit on her board.

Further inspiring those in the room, Holmes stated that “individual engagement is easier than trying to change the system.”

Young venture capitalist Josh Kushner started Oscar Health, an insurance start-up transforming the health care industry through the use of technology, data, personal service and design. Serving the NY/NJ area, Oscar brings doctors, resources, and your health records to your phone for easy 24/7 access. “Health care was built on business to business, not with the consumer first,” stated Kushner. “We’re using technology to make insurance simple, intuitive, and human.” According to the New York Times, Oscar has “the new era tech pedigree to become the Spotify, Airbnb or Uber of health insurance.”

However, most of the 400 individuals in attendance represented local communities throughout the country.

So how does it work at the local level? The CHMI follows a six-step process to drive systematic change and create measurable results, but individuals and businesses within the community do the work. The approach includes:

It is happening in the Coachella Valley, and we are doing a very good job. As the President says, this is really, really important. “I want to say that we started here,” he reiterated at the breakfast. “Because if you can prove that you can build a grass roots community-driven, constantly evolving, constantly improving system committed to wellness – not fixing sickness, but wellness; if you can do that, everyone in America will take notice. It’s really important.”

To get involved with the Clinton Health Matters Initiative, review the Coachella Valley Blueprint for Action www.clintonfoundation.org/files/chmi_coachella_valley_blueprint.pdf and contact regional director Tricia Gehrlein at tgehrlein@clintonfoundation.org or (760) 834.0975. For more information on the Clinton Health Matters Initiative visit www.clintonhealthmatters.org

How Lucky Are We? We live in a pretty extraordinary place. From hot air…