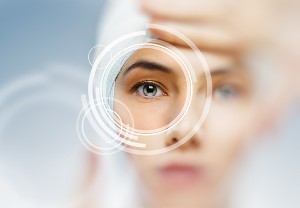 Women are more affected by eye disease than men, especially those 50+.

The majority of people believe that men and women have about an equal incidence of eye disease causing vision impairment. The reality is that women are more affected than men, with the difference starting to accelerate at about age 50. Women have a higher incidence of cataract, macular degeneration, diabetic retinopathy and glaucoma. This trend is exaggerated in the over 75 age group, in part because women live longer than men. In fact, there are twice as many women as men over the age of 85.

According to Prevent Blindness, the number of Americans with age-related eye disease, or vision impairment that results from age, is expected to double within the next 3 decades.1 The primary age-related eye conditions and diseases affecting women more than men are the following:

In addition to vision-threatening disease, women are more likely to have untreated refractive errors and dry eye. Women have twice the incidence of moderate to severe dry eye as men.2 As women age and especially as they reach menopause, they can experience hormonal imbalances that are thought to contribute to dry eye syndrome. Dry eye is more common after menopause and medications that cause dry eye are more commonly prescribed to women at that stage of life, including exogenous hormones. These were once thought to decrease the risk of eye dryness but instead have been found to contribute to the development and severity of dry eye.8

Women are prescribed anti-depressants at twice the rate as men. Anti-depressants are known for their anti-cholinergic drying effects. Other medications include Topamax which is more commonly prescribed to women for migraine and off-label for weight loss and depression and is associated with acute myopia and mono-pupillary block secondary angle closure glaucoma.9 Tamoxifen, commonly prescribed for treatment or prevention of breast and ovarian cancer, has been associated with crystalline maculopathy and cystoid macular edema. Gilenya used to treat MS (three times more common in women) is likened to the development of macular edema and increases the risk of uveitis by 20% in patients that have had previous episodes.10

According to the National Eye Institute cataract is more likely to occur among women (61%) versus men (39%) 3. In addition, the number of people in the US with cataracts is expected to double from 24.4 million to 50 million by 2050.4

Diabetic eye disease, or diabetic retinopathy, has a higher incidence in women starting at age 50.5 A similar statistic indicates that women account for 61% of glaucoma cases in the U.S.6

Macular degeneration has a higher prevalence in women than men, and as the population increases this difference is expected to increase.7

What can women do to help mitigate the increased risk of vision impairment?

Dr. Evans is the founding owner of Evans Eye Care in Palm Desert and can be reached at (760) 674.8806 or online at www.evanseyecare.com.

Need Help Getting Your Vaccine? With information on COVID-19 vaccinations…

Interested in a Career in Mental Health? Students of all ages, and especially those exploring…