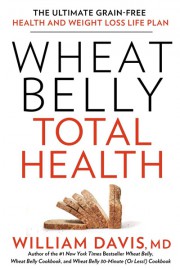 William Davis, M.D., changed the way many of us view “healthy whole grains” with his New York Times bestseller, Wheat Belly. Describing his first book as a means of “easing consumers into the real conversation,” Davis takes it a step further in his new book, Wheat Belly Total Health, explaining the tremendous benefits – and reasons – for eliminating all grains from our diet.

Wheat Belly fans know Davis as a passionate educator who shares facts from the heart with humor and simplicity. He is also a cardiologist and consummate researcher who advises with care and conciseness. His goal: to empower people to take their health into their own hands.

According to Davis, conventional nutritional advice has led our country, and now the world, into record-setting epidemics of obesity, diabetes, and other “modern” health conditions, and it’s time for change.

In Wheat Belly, he explained the history of wheat and why the “Frankengrains” of today have such an adverse effect on our bodies. Total Health guides readers through grain withdrawal symptoms, lifestyle patterns and progress, nutritional supplementation, and natural remedies for specific wheat-induced conditions such as irritable bowel syndrome, inflammation, autoimmune disorders and
thyroid disease.

The movement Davis helped create is gaining momentum and causing those who have written the rules thus far – the agricultural industry, leading health organizations, and food industry giants – to take note. The new demands come from consumers who are crowd-sourcing and sharing their viewpoints, wheat-free lifestyles, and astounding success stories on improved health through the powerful means of social media.

In preparation of his January 14 appearance as part of the Eisenhower Wellness Speakers Series, Desert Health® interviewed Dr. Davis on the wheat-free movement and where we go from here.

DH: Three years ago, you introduced the science behind wheat’s negative effects. Now you warn against all grains. Was there a master plan behind these steps, or an epiphany?

WD: If there is a master plan, it is really to provide information and education that empowers people. I have been so thoroughly disappointed in watching what has happened to health care; watching my colleagues become robots for a system that focuses on delivering drugs and procedures that drive revenue for their systems and has little to do with health.

I am working on a series of projects all meant to help people see the real story and not to rely on dietary misinformation provided by organizations controlled by lobbyists. I am trying to pull back the curtain and provide better information for people so they can take control of their own health.

DH: Why ALL grains?

WD: If someone chooses only to eliminate wheat they will be much better off, but I find that people who really want to go the whole mile and want full restoration of health, such as reversing blood sugars to normal, reducing insulin to favorable levels, reversing autoimmune diseases, and restoring healthy bowel flora, have to eliminate all grains, correct nutritional deficiencies, and be aware of herbicide and pesticide residues in our produce.

The truth is that all human beings are “sensitive” to the systemic chain of destruction caused by ingesting grains. Just one of the many reasons is that you don’t have a 4-compartment stomach (like a cow), nor do you have the unique microorganisms necessary to digest grains. You are not a ruminant.

And then, agribusiness exaggerated grain’s effect on humans by creating these genetically altered strains. They made it much, much worse. I often wonder, if they hadn’t done that, would we be having this conversation or still eating “healthy whole grains”? So, in some ways, I am grateful, because the cause and effect would not have been quite as obvious.

You see, grains were initially adopted as food by humans 10,000 years ago by the starving and desperate, but now are upheld as the ‘ideal food’ which is complete absurdity. If you eliminate grains, you eliminate a powerful source of phytates, so if you were to track a grain-eliminating population, you would see a rise in iron levels and ferritin; you’d see a rise in zinc, magnesium, and vitamin B12. It is not speculation, but fact, that the second most common cause for iron deficiency in the world after blood loss is grain consumption. What other food is fortified to compensate for its nutrient-blocking effects? Countries sending rations of grain to other countries
have an expense line item to compensate for it!

There are no nutritional deficiencies from eliminating grains, and at many levels, nutrition improves off grains.

DH: Advice you give those just starting to eliminate wheat include “Don’t exercise and eat salt.”

WD: There is an opiate withdrawal syndrome when you stop eating wheat and grains. The withdrawal process can be very unpleasant and uncomfortable. I’ve had people rolled up in balls sobbing. Some people have this compulsion to exercise, believing that the limiting factor in weight is lack of exercise — it’s not. During withdrawal, exercise makes them feel sick, so the first week of withdrawal is a time to pamper yourself and do nothing more
than casual activities like walking.

With the salt, we do have solid data that shows that grains cause sodium retention and that high insulin levels are associated with sodium retention. So you get rid of these effects and there is salt loss. It is very common for people to become dehydrated and get light-headed, so it’s a matter of compensating for the sodium and water retention. These effects certainly are variable and tend to dissipate over time.

DH: Do you think that practitioners are starting to get it?

What has more commonly happened is that patients come back with weight loss, the disappearance of rashes, normal blood pressures, no more migraines or joint pain and doctors asked, “what did you do?” and the patient says, “I stopped eating wheat” and the doctors come to me and say, “maybe there is something to this.”

DH: Where do you see our government and governing bodies going from here?

WD: I don’t think we will ever hear governing bodies like the USDA say that “based on the new research available, we realize we were wrong” or admit that their guidelines contributed to the worldwide obesity epidemic.

So what I think is going to happen is what I see with the American Diabetes Association, and that is a very slow, quiet ratcheting back. For instance, a FAQ on their site asked
if diabetics can eat cakes, cookies and candies. The answer was ‘Yes. Sugars are natural, but just watch your blood sugar levels and adjust your insulin accordingly.’ They have since removed that one. They also used to tell people to target 300 grams of carbs a day. Now they recommend targeting 50 grams
per meal.

When the Going Gets Rough, Check in with Yourself 2020 has been challenging. These months of sheltering…