SO Much More Than Golf at the Humana Challenge 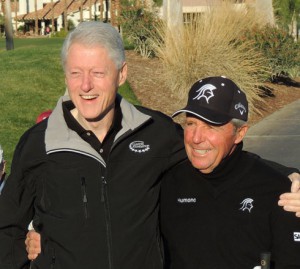 The Humana Challenge is proving to be so much more than a world-class golf tournament. You probably heard about Brian Gay’s exciting playoff victory. But did you hear about the many other triumphs featured around the event?

The busy weekend started early Saturday when more than 200 volunteers joined The Humana Foundation, KaBOOM!, the Boys & Girls Club of Coachella Valley and the City of Desert Hot Springs to build a multigenerational playground in Desert Hot Springs. This is the second playground our community has received from the tournament sponsor who also provided funding for a new recreation facility in Oasis last year. These new sites are prime examples of enhancing the Valley’s physical environment and access for all, both goals of the Clinton Health Matters Initiative as discussed in this issue’s feature.

Leading up to the event, many enjoyed the free Humana Well-being Walk and Family Fun Fair, and Humana Day at the Certified Farmers’ Market. Healthy activities were also incorporated into this year’s theme days including cooking demonstrations and a workout on Women’s Day, and Tae Bo with Billy Blanks and Pilates for young fans on Kid’s Day.

Humana’s Walk It pedometer program was as successful as ever, and is going on tour as Humana challenges other PGA tour stops to meet or surpass the number of steps taken at the Humana Challenge. The winning community will receive a KaBOOM! playground of their own. Last year, tournament attendees walked almost 100 million steps resulting in $2 million donated to local charities by the Humana Foundation. We look forward to the announcement of this year’s revenue raised for local charities.

Congratulations to the winners of our drawing: Jeanne D. of Palm Desert and Christine S. of La Quinta.

The Humana Challenge is not only providing the Coachella Valley with an award-winning PGA Tour event, but also creating healthy, sustainable change for members of our community.

Thank you to Humana, the Clinton Foundation, Desert Charities and everyone who took part. Whether you come for the golf, the celebrities or just the fun of it all, we hope to see you at next year’s Humana Challenge!

Make a Day of It! Mark your calendars Saturday, February 22, for the…