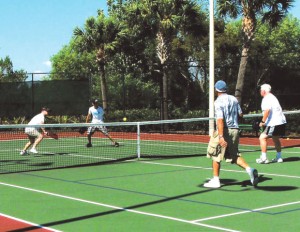 You may have heard of this crazy new game called “pickleball.” The US Pickleball Association (USAPA.org) calls the game a “highly contagious, progressive and incurable disease” and estimates that between 40-50,000 people worldwide are currently infected. “While rarely fatal, the disease has enormous positive impact on the lives of infected individuals and on society as a whole.” Here in the desert, we see Pickleball Fever firsthand as it is quickly becoming the game of choice for active seniors!

So what is pickleball fever all about?

Pickleball was introduced in1965 on Bainbridge Island near Seattle as a backyard family game on a badminton sized court (44’ X 20’) with a 34-inch net. The inventors used wooden paddles and a whiffle ball that happened to belong to the family cocker spaniel. Because of his habit of running after stray balls and hiding in the bushes, ‘Pickles’ became the game’s namesake.

The sport is a mix of table tennis, paddle tennis, badminton and tennis. It is a great fit for seniors because it is very easy to learn; doesn’t require the mobility of tennis; and uses an underhand serve. The smaller court also creates a social atmosphere, and playing doubles and/or mixed doubles is promoted. 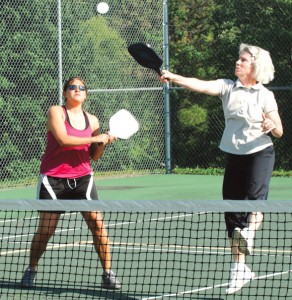 Desert residents have contributed to the growth of pickleball nationwide as snow bird ambassadors take the game with them back to their summer locations. Tennis courts can be converted to pickleball courts, and therefore any park & rec department can develop a local following. Pickleball was also the largest division at our recent International Sports Festival & Senior Games in February.

As a tournament player and teacher, I love watching pickleball players improve to the point they want to participate in the many tournaments here in the desert. We currently have over 13 clubs participating in our new intra-club monthly social mixers.

For more information on the game, the USAPA recommends The Pickleball Handbook by Mark Friedenberg–or simply come out and quickly learn the game from a fan or friend with pickleball fever.

Barbara Wintroub is a Pickleball Teaching Professional located in Palm Desert and can be reached at (310) 913-3333 www.retrofitpilates.com

19 Responses to “PICKLEBALL: The Fastest Growing Sport in North America”

Virtual Technology: A New Form of Mental Training For years, seeing youth athletes on their phones or…

Keep Moving for Immunity These are trying times, not just for Americans but…