NeuroQuant: A Medical Imaging Aid to Early Detection of Alzheimer’s

Alzheimer’s disease is a form a dementia that robs millions of people each year of critical thinking capabilities that are needed to live a healthy and happy life. The statistics are staggering in both number of lives affected by the disease and the cost of caring for those individuals.

The Alzheimer’s Association latest figures are:

In April 2011, for the first time in 27 years, three expert work groups (Alzheimer’s Association, National Institute on Aging and National Institutes of Health) developed new criteria and guidelines for diagnosing Alzheimer’s disease. The new criterion expands the definition of Alzheimer’s to include two phases of the disease: (1) pre-symptomatic and (2) mildly symptomatic but pre-dementia, along with (3) dementia cause by Alzheimer’s. This reflects current thinking that Alzheimer’s begins creating distinct and measurable changes in the brain of affected people years, perhaps decades, before memory and thinking symptoms are noticeable. 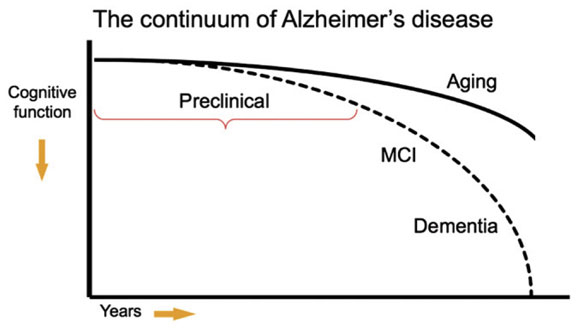 Early detection of Alzheimer’s has benefits to both physicians and patients. Early diagnosis allows the physician to educate the patient of the various treatment options available to them, and the patient will have an understanding of what is happening, and therefore, will be able to evaluate their options and plan for their future. While there is no definitive test for early detection of Alzheimer’s, there is now a diagnostic test using magnetic resonance imaging (MRI) and a special post-processing volumetric software. This program, called NeuroQuant, is the first of its kind available to assist diagnosis. 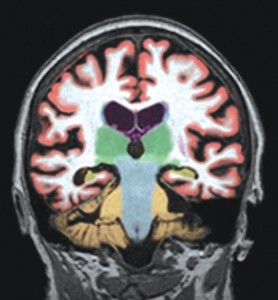 NeuroQuant produces two reports: (1) Age-Related Atrophy report, and (2) General Morphometry report; and color-coded brain segmentation. The Age-Related Atrophy report contains the absolute and relative volumes of the hippocampus and inferior lateral ventricles. The resulting values are compared to age-appropriate reference distributions. The General Morphometry report provides the absolute and relative volumes for key structures of the right and left side of the brain. Physicians may use these reports, and the color-coded brain images, to measure atrophy of the brain.

NeuroQuant may also be used for comparative purposes. Alzheimer’s is a progressive disease, so physicians may get a “baseline” study of a patient’s brain when there is a suspicion of Alzheimer’s, and then have follow up exams at prescribed times to see if the brain atrophied, and if so, at what rate. In addition, the standard MRI brain evaluation performed with NeuroQuant assists the clinician in determining other potential causes of dementia such as vascular dementia, Huntington’s disease, fronto-temporal dementia, Parkinson’s disease, amyotrophic lateral sclerosis, and pseudo-dementia related to major depression.

The insidious onset of Alzheimer’s disease, and other dementia related disorders, complicates the clinical evaluation. NeuroQuant MRI is a highly valuable tool that aids clinicians in the diagnosis, treatment, and surveillance of dementia.

Dr. Hancock is a Board Certified Neuroradiologist and can be reached at Desert Medical Imaging 760.694.9559