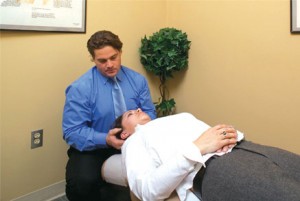 Chiropractic adjustments can be beneficial for some forms of migraine

If you have ever suffered with a migraine headache or seen someone who has, you know firsthand how debilitating the pain can be. Migraines can occur anywhere from once or twice a year to several times per month. The cost of treating migraine patients in the United States is estimated at $13 – $17 billion per year.

According to The American College of Emergency Physicians Foundation, headaches and more specifically migraine headaches have consistently been the number one reason a person is seen in an emergency room. This is a huge problem in both direct and indirect costs. One study found that the annual cost to employers from migraine-related absenteeism is over $15 billion annually. Migraine is usually managed by medication, but many patients do not tolerate migraine medication due to side effects. Others prefer seeking treatments that they believe may address the cause of migraines more directly and not just treat the symptoms. Non-pharmacological management is an option. This can include chiropractic care, exercise, massage therapy, an elimination diet, and/or nutritional supplements.

Although the symptoms of a migraine can vary from person to person, the most common include severe head pain with a feeling of expanding pressure in the head. Migraine symptoms sometimes begin with what is referred to as an aura. The aura begins as some sort of visual disturbance including blind spots and blurred vision. The aura can be accompanied by feelings of nausea, lightheadedness or dizziness, and sensitivity to light or loud noise. As these symptoms worsen, the person may experience vomiting, vertigo, severe fatigue, muscle tension, and pain on one side of the head or base of the skull. In a study of 144 people with migraines, 75% of patients reported neck pain associated with a migraine attack.

There are several types of migraine headaches including basilar, hemiplegic, abdominal, ocular, and cervicogenic. The exact mechanism of how migraines are caused is not fully understood and difficult to explain. The latest research is leading experts to believe that it is a neurovascular phenomenon initiated by inflammation. It appears certain inflammatory chemicals produced in the body in response to noxious chemical or mechanical stimuli irritate sensitive nerves at the base of the brain. This area is called the trigeminocervical nucleus. The inflammation of these nerves precipitates a cascade of events that results in alterations of the vascular dynamics and increased blood flow to the head. This results in what is known as migrainous activity.

Although the exact mechanisms that cause migraines are not well understood, several potential migraine triggers are well documented. Food allergies and sensitivities can contribute to a buildup of inflammatory molecules and precipitate a migraine. It has been known for some time that certain chemicals found in processed foods can provoke the inflammatory mediated neurovascular response. Artificial sweeteners including aspartame, sucralose and alcohol sugars can induce these inflammatory changes. Food additives including MSG (Monosodium Glutamate), sodium bisulfite ( a preservative found in wine, bottled drinks and dried fruit), sodium benozoate ( a preservative found in soy sauce, soups, salad dressings and other foods found in plastic or glass containers), all have the ability to provoke a migraine in susceptible individuals. These patients are often referred to as chemically sensitive people.

Chemical sensitivity is related to a genetic disorder whereby individuals have weaknesses in their liver detoxification systems. This leads to a condition called impaired detoxification with migraine headaches and fatigue as some of the primary symptoms. Avoidance of preservatives, food additives and artificial sweeteners coupled with consumption of a nutritional supplement designed to assist in liver detoxification can be helpful for these migraine sufferers. Migraine activity has also been associated with low blood magnesium status. There are several studies that suggest taking 600mg. of magnesium glycinate can help reduce migraine frequency.

Several published studies recently suggest that spinal manipulation and more specifically chiropractic care might be as effective as propranolol and topiramate (medications used to treat migraine) in the prophylactic management of migraine. This can best be explained by the misalignment of upper cervical vertebrae producing mechanical irritation of the trigeminocevical nucleus and the resulting inflammatory neurovascular cascade previously mentioned.

It has been my experience that not all forms of migraine respond to spinal manipulation. However, when coupled with proper nutrition for improved liver detoxification, elimination of food allergens, magnesium supplementation, avoidance of neurotoxic food additives and preservatives, proper rest, and adequate exercise, improvement is possible. Successful treatment of migraines often requires an integrative approach to patient care that combines traditional medicine and holistic modalities working together to minimize migraine symptoms and provide long lasting relief.

Remember to be a proactive and informed health care consumer.