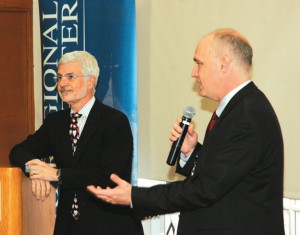 In celebration of American Heart Month, Desert Regional Medical Center (DRMC) hosted lectures by three expert physicians on heart health, prevention and treatment of various heart diseases. The lectures were part of the hospital’s annual Affair of the Heart event, held each year on Valentine’s Day.

I attended the event and was delighted to see a standing room only audience. I was also impressed by the healthy cuisine offered by Chef Brian Sisk of DRMC’s food and nutrition department who served guests a seasoned salmon over quinoa and large plates of fresh fruits and vegetables.

Some of the key points discussed by these noted physicians include:

Avoiding the lure of processed foods

Dr. Gundry’s lecture focused on how modern food manufacturing has made it easy for people to consume foods that taste great, but are terrible for their health.

“The modern diet is so seductive to our genes that many of us succumb to the allure of simple sugars and forget how totally foreign simple sugars are to the natural human diet,” Gundry said.

He also criticized the oils that are still too large a part of the modern diet, and said that our diet should instead include more olive oil and fatty fish, such as sardines. Gundry added that in 1900, there were three fats in our diet: butter, beef tallow and lard. Now, they are replaced by killer polyunsaturated fats introduced in the 1970s: corn oil, soybean oil, grapeseed oil, sunflower oil, safflower oil, and cottonseed oil.

“If you look at pictures of people from the 1950s, you will be struck by the fact that everyone looked skinny,” Gundry said. “And few of these people were exercising regularly.”

Understanding your risk for heart attack

Dr. Schatz discussed how to know your risks of a heart attack. Schatz was co-inventor of one of the first successful coronary stents, a small mesh tube that’s used to treat narrow or blocked arteries, called the Palmaz-Schatz stent. Stents have led to the reduction in open-heart surgeries in the United States, Schatz said.

Schatz said that despite the advances in modern medicine, some people still don’t recognize when they are having a heart attack. It is important to get treatment as soon as possible to minimize damage to the heart.

Some of the early warning signs of a heart attack include:

It is important to remember that not all people who have heart attacks experience the same symptoms or to the same degree. The warning signs of a heart attack for women may be slightly different than those for men. While both commonly experience chest pain or discomfort, women may be more likely to have shortness of breath, nausea and vomiting, and back or jaw pain. Some people may not have any symptoms at all, especially diabetics because that chronic condition can affect the nerves.

Most people have warning signs and symptoms hours, days or weeks beforehand. One of the earliest warning signs of an impending heart attack is chest pain, or angina, that occurs repeatedly because of exertion and is then eased by rest.

This common heart disorder occurs when electrical signals in the heart become irregular, causing the heart’s upper chamber to beat out of rhythm. “When the heart rhythm is out of control, people feel an uneasy feeling in their chest,” Dr. Bhakta said. “This symptom can mean that you have a heart-rhythm disorder, which can be symptomatic of something more serious.”

Atrial fibrillation is first diagnosed through an electrocardiogram, which measures the heart’s electrical impulses. “Cardiac-rhythm disturbances can be fatal, but most are treatable conditions,” Bhakta said. “In addition to, or in lieu of taking medications throughout one’s life, there are procedures that can eliminate these abnormal heart rhythms.”

Thank you, Desert Regional Medical Center, for offering this very informative and free event for the community!

All three physicians who spoke at Affair of the Heart are on staff at Desert Regional Medical Center and can be reached through the hospital’s free physician referral service by calling 1-800-491-4990. Find out about upcoming lectures by signing up for Desert Regional Medical Center’s email newsletter by going to www.desertregional.com and clicking “Newsletter Sign-up” at the top of the page.