May is Stroke Awareness Month

Are you aware of how lucky we are? 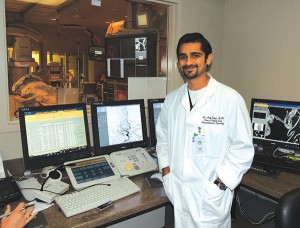 The Valley is lucky to have Dr. Asif Taqi and his expert team at Desert Regional’s high-tech Stroke Center

Randal Bonnell of Banning went to bed at 11:30pm on a Thursday night and awoke the next morning with half his body paralyzed. His wife, Vickie, heard a noise around 4:45am and realized that her 55 year-old husband had fallen out of bed. Although he said he felt fine, Randall wasn’t speaking clearly and couldn’t lift his arm. Recognizing the signs of stroke, Vickie dialed 911.

Although there were closer hospitals, Vickie, an occupational therapist, knew that Desert Regional Medical Center had a state-of-the-art stroke center and requested that he be taken there instead.

Upon arrival, they met Dr. Asif Taqi and his team of neuroscience professionals. Because they couldn’t identify the exact time of Randall’s stroke, he was not a candidate for IV-tPA, medication that when administered within 3 hours of a stroke can minimize, and even reverse, damage. However, using the Stroke Center’s advanced neuroimaging, Dr. Taqi was able to promptly identify a significant area of Randal’s brain that was still salvageable if the clot could be removed by a thrombectomy, a procedure that goes through the groin artery into the brain and removes the clot to potentially reverse the happening stroke.

Randal underwent an emergency thrombectomy in Desert Regional’s advanced bi-plane angiosuite which proved successful. His speech and mobility were restored.

“We used to have only three hours to treat a stroke in hopes of restoring full capacity,” says Dr. Taqi. “This technology has given us a much longer window to reverse the effects of stroke.”

Dr. Taqi, the director of neurointervention and critical care neurology, is one of the many neuro sub-specialists the hospital has brought on board. This talent, coupled with the new technology, has earned Desert Regional’s Stroke Center the designation of a Stroke Receiving Center by the Inland Counties Emergency Medical Agency (ICEMA). Desert Regional is also the Advanced Intervention Stroke Center for Riverside Emergency Medical Services Agency (REMSA).  As such, they are now receiving critical care patients from a larger region and saving more lives.

As May is Stroke Awareness Month, it is important to be aware of the fact that we have this service in our own backyard. And this makes us lucky, as many of the 795,000 Americans who suffered a stroke last year alone did not get the proper lifesaving treatment in time.

Dr. Taqi and his team understand that education and awareness are key when it comes to saving lives from strokes. “Only 1% of stroke victims are receiving IVtPA in this community, and the national average is 7%, which means that 6% of locals who suffer a stroke are not receiving timely and maximum care,” he says. “This is mostly due to lack of education in the community on recognizing the signs and symptoms of stroke in a timely fashion.”

He adds that educating first responders like EMS and emergency room staff is also important. Dr. Taqi hopes to change these stats and keeps busy speaking with community and medical groups to spread the word on the signs of stroke and the technology now available to save lives.

The three areas of education on which they focus are prevention; acute treatment (IV-tPA and thrombectomy); and recovery from a completed stroke (rehabilitation). They have also established a Neurointervention Fellowship which will train one to two fellows a year at Desert Regional. Their first fellow graduates this year.

Taqi and his team are also hosting the First Annual Neurovascular Symposium to be held May 31 at the Riviera Hotel in Palm Springs. In addition to their Desert Regional Medical Center team, the symposium will feature neurosurgeons, neurologists, radiologists and other stroke experts from throughout the country to educate attendees on the many advances that have been made in stroke awareness, diagnosis and treatment.

“Stroke care has changed drastically in the past decade,” he states. “Ten years ago, there was nothing available for acute care; and the treatment was to give patients an aspirin and see what happened.” He adds that five years ago it used to take several hours to remove a clot from the brain. “Now it takes us as little as 20 minutes to open the arteries.”

During this symposium, he and his team hope to educate local medical professionals on how to better diagnose a stroke patient; the advanced stroke treatments available based on scientific data; and how and where to properly triage and treat patients.

More than ever before, he adds, stroke is treatable, and potentially reversible if a patient gets the proper care in a timely manner.  “It’s not uncommon now to have patients arrive unable to walk and talk, and get discharged home with minimal or no deficits.”

No one knows that better than Randal and Vickie Bonnell. “Dr. Taqi is our hero,” said Vickie, who remained close to her husband in the ICU for six days and then following in acute rehab. “He would stop and speak with us in the halls, and just seemed like an old friend. It was a challenging time for us, and his knowledge, expertise and friendly personality put us at ease through the entire process.”

“Vickie is the real hero,” says Dr. Taqi, “because she recognized the signs of stroke and knew what to do.”

Desert Regional Medical Center’s Stroke Center can be reached at (760) 323.6511. For more information on the First Annual Neurovascular Symposium, contact Toni Rowe at (760) 323.6563 or visit drmcmedstaff.org/event/2014-palm-springs-neurology-symposium.

Changing Pain to Comfort In mid-July, I had rotator cuff surgery on my…

Beating Cancer Many have been following my cancer journey, which…

Tending to Our Tendons As we become more active, our bodies become more…