Learning to Trust the Trail

This summer did not go well. In July, I lost my mother to a brutal disease, and thus inherited her responsibilities: keeping her home, caring for my father, and the minutia of wrapping up her “paper existence.” At the same time, my own family expanded. Our grandson moved in for the summer and our son rebounded after college. The presence of the boys created a buoyant atmosphere at my house, a sharp contrast to the sadness at my dad’s.

Feeling cornered by the demands of this hectic life, I put myself at the back of the line. I was so busy that I missed the husband with whom I live. I also missed the frenetic energy of the boys and their milestones. As I commuted back and forth between two homes and two lives, most of all I missed myself. I relinquished good nutrition in favor of comfort food. Water gave way to wine. Sleep became elusive. Exercise went out the window. By August, I was stiff from stress, bloated and swollen from poor nutrition, flushed with hormones, and craving solitary confinement. This was the toughest spot in which I had ever found myself.

As women do in times of trouble, I found myself turning to a friend for guidance. Cheryl, that rare true friend, reminded me that in order to be a good wife, mother, and daughter I needed to start taking care of myself. She pulled out her calendar and pointed to the trip we had planned long ago, a 15-mile hike of the Pacific Crest Trail near Lake Tahoe. The hike was an effort to capture some of the empowerment and beauty in Cheryl Strayed’s inspiring book, Wild.

Having never hiked more than the trails surrounding my home, I inquired as to exactly what I needed to pull this off (secretly hoping to find a loophole that allowed me to bow out gracefully). Cheryl had everything arranged. I was to arrive wearing my most comfortable hiking shoes and sunscreen. Everything else was under control, including our gear and food. Committed, and thankful that my brother was going to join us, I swallowed my fear and wrote it on my calendar. The night before we departed, I felt a little puddle of fear swirling in my stomach and began to take inventory of what scared me the most. It didn’t take a degree in psychology to tell me that it was more than just hiking of which I was scared. 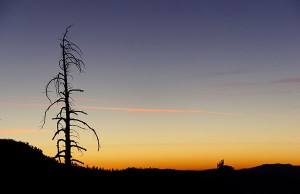 Pam had to overcome many fears to face the Pacific Crest Trail.

Primarily, I was riotously out of shape. Would I be able to breathe at altitude? Could my muscles recover sufficiently to descend on day two? Secondly, I am a notorious germaphobe. Would I be able to use the woods as my toilet? How could we eat a proper meal without washing up? What kinds of creatures went bump in the night when you slept on a bed of leaves? What does one do when confronted by an angry bear? This little control freak finally had to face her fear of the unknown. The next morning, I slapped a smile on my face, a 30-pound pack on my back, and we were off.

It began quite innocently. There was a designated trailhead with signage and a map. About 200 yards in, however, the trail turned into a narrow ribbon of dirt. This is what was supposed to lead us from Donner Pass to Squaw Valley? At points, the foliage was overgrown and in others there was no foliage at all. At the highest peaks, there appeared to be no trail, as it was either covered by rockslides or invisible over the surface of a boulder. It felt like more of the same: a lot of decisions being made for me with very little input from me. Frustrated, I placed my trust in Cheryl and Matt, looking to them to lead the way.

Our packs were heavy and mine dug into my shoulders and hips. A big part of the weight was water. I pondered that as we trucked through the endless dust and dirt enhanced by the drought. It was incredibly dry at altitude, as evidenced by the creaks of dying trees and the crunching of leaves. The infamous Donkey’s Ear that lines this portion of trail was shriveled down to a crunchy cacophony of death. Reassured by the weight on my shoulders, I didn’t have to worry about water. We carried a gallon each, as well as a purifier to use at any water sources we found. In the entire 15 miles, we saw only one active stream and we certainly took advantage of it. 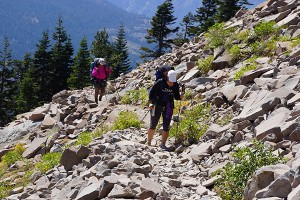 Just when I thought that I had a handle on my fears things got tricky.

We came upon a sheer cliff that obviously had fallen victim to a rockslide. The trail disappeared under a pile of broken rock. To the right of the rock, the cliff dropped off at a 90-degree angle. To the left a sheer wall went straight up and disappeared into the sky above. We had no choice but to traverse the rocks. One long, unsteady step at a time we concentrated on making it across. I almost blew out my ankle on several occasions, as the rocks shifted and pulverized beneath my feet. I think I held my breath for most of that test. From the other side, I looked back in awe of my accomplishment. I was sweating and breathing heavier than I did on any climb, but for the first time in the trip, the puddle of fear in my stomach was gone. I felt empowered and confident. I looked back upon those rocks as incidents that had befallen my family over the summer. Some were crumbling and unsteady. Some were solid. All required dedication and concentration to navigate. And I did it.

Eleven miles in, we found a flat spot to make camp. I was so tired, hungry, and sore that a squirrel could have bitten my nose while I slept and I wouldn’t care. We set up our tents and spread out for dinner. As the burgers cooked, I wound my way out to a nearby ledge to watch the sunset. The incredible colors of the fading light cast a striking profile of the peaks splayed out before me. As the air cooled, the wind died leaving complete silence. Between the sunset and the quiet, a sense of calm embraced me. 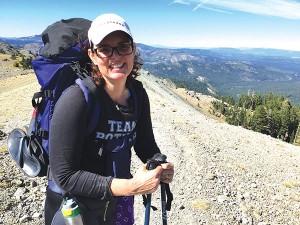 After dinner, we lay across a blanket and stared up at a clear, starry sky. The moon made an arc from east to west and stars appeared brighter than I had ever seen before. The air was crisp. The quiet was peaceful. The little voice in my head had finally shut up. All was right with my world again. As if in confirmation, a star shot across the sky.

We woke at first light. Packing up, we were giddy at the mere four miles left to go. Our plan was to hike to the Squaw Valley tram and ride it down, triumphantly. Unfortunately, life doesn’t always go according to plan.

We missed our turn and added a treacherous extension to our descent. Unstable stairways twisted around the sheer faces of rocks lining the mountainside. Our knees took a hit, but nobody twisted or broke anything. Covered in sweat, dust, and grime we slipped out of the woods into a parking lot at Squaw. No fanfare. Just three exhausted hikers with smiles of accomplishment. After all, life doesn’t hand you a trophy for making it. You need to acknowledge each victory yourself.

The things I learned about myself up on that trail resonate to this day. I can do anything I put my mind to doing. I am the captain of my ship and only I can determine its course. While I can rely on the support of people I love, I need to learn from them so I can be independent in the end. I learned to forgive myself for not being perfect. Most importantly, I learned to trust the trail. Just as it did up on that mountain, the trail will lead you where you need to go. I have recommitted to myself by eating healthy foods and exercising regularly. I’m drinking water again, but still enjoying some wine. I look at my family and feel the same sense of calm I felt watching the sunset on that ridge. I’m where I need to be, living how I need to live, with the people I love the most. Choosing, as I move forward on shaky legs, to trust the trail.

Pam Salvadore is a contributing writer and seasonal resident of La Quinta.