Now offering free home delivery within the US through August 15, 2020! Click here to receive your complimentary copy.

Laughing in the Face of Uncertainty

You may have heard the saying, “Laugh till it heals.” Current research agrees; laughter is considered a form of medicine. And it is a sharp gift that can cut through fear.

During these stressful times of facing a buggy-man named COVID-19, it may be time to use this gift as a blessed weapon because laughter is contagious, too. You may be thinking, “What? Laugh at a time like this? Is she nuts?” Please allow me to share a story and present research to validate my statement.

In the echoes of my mind sits a British woman named Petronelle who lived on Cape Cod. Pete, as she preferred to be called, mentored me during my battles with breast cancer and the writing of my first book. Petronelle’s numerous novels of espionage, romantic suspense, and mysteries were published worldwide. If not plotting a murder, she could be found sitting on her blue recliner watching TV and laughing at the nightly news.

Petronelle’s joy was addictive. If I felt frightened, I phoned her to get a “hit of Pete.” The worse the situation, the louder she laughed. At first, I found this behavior quite alarming and questioned her state of mind. However, over time, I realized it made any crisis seem less dire, even a life or death situation. In my case it was cancer. In her case, it was her eyesight. “Yes, the doctor told me I’m going blind,” she laughed. Wiggling her fingers as she continued, “So, I’m learning braille because although my eyes may fail me, my fingers still work.” Then she belly-laughed while rocking in the chair. There was something about crisis delivered with a British accent followed by howling laughter that made everything seem better. “Eventually, we are all going to die,” she chuckled, “so, it really doesn’t matter, Dear, does it?”

Petronelle had a point. The truth made me giggle. She conquered fear from the higher vibration of joy and laughter. I loved her for it because she always made me feel so good about myself by making me feel good about the outcome of any situation. I felt invincible.

Leading by example, her giggles taught me to laugh in the face of fear. So, while I went through breast cancer, recurrence, surgeries, treatments and tests, I followed in Petronelle’s footsteps and laughed as often as possible, about anything, or nothing. At times my husband wondered about my mental state.

Delivering catastrophic news via laughter chased Petronelle’s blindness (British) “bogeyman” and my cancer boogeyman away. Fear cannot live in a laughter-filled environment. I decided to research why the power of laughter worked and found that something amazing happens to our mind, body and soul when we laugh.

According to current research, laughter creates scientifically measurable positive change. It is also an excellent treatment for relieving stress and research shows stress is a killer. Forbes magazine explained how laughter has an anti-inflammatory effect that protects blood vessels and heart muscles from the damaging effects of cardiovascular disease.1 Regular, hearty laughter should probably be part of every heart disease prevention program. And, according to the Journal of Neuroscience, laughter is a potent releaser of endorphins, our natural, feel-good chemicals. 2

The endorphin effect also explains why social laughter is so contagious. Laughter contagiously forms social bonds. When an endorphin release spreads through groups, it promotes a sense of togetherness and safety. Each person in the social unit becomes a transmitter of good feelings to others via laughter. It explains why when someone starts laughing, others laugh, even if they are not sure why everyone is laughing. The reason is not as important as the good feeling of belonging.

At first, the concept of laughing in the face of fear felt forced to me. But, over time, it replaced my old behavior of becoming anxious. When necessary, “fake it till you make it.” Allow laughter to become the new habit that naturally enhances focus for problem-solving. It is easier to see a solution when fear is removed from the equation.

Petronelle died with her eyesight. I still miss her, but her laughter lives in the echoes of my mind. Despite the odds of surviving cancer three times, I stand in the protection of my Higher Power during challenging times, and laugh.

“Laugh at fear and uncertainty? Impossible!,” you may say. Try it. You might discover your new happy-pill.

Kathleen O’Keefe-Kanavos of Rancho Mirage is a survivor, author, dream expert, speaker, TV/radio host/producer and has been featured on Dr. Oz and The Doctors. For more visit www.KathleenOkeefeKanavos.com.

8 Responses to “Laughing in the Face of Uncertainty” 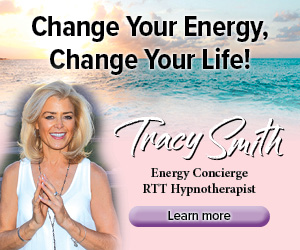 Art to Honor Mother Earth and Change Since the beginning of 2020, many of us have felt the…

Becoming Aware of Your Inner Critic Throughout my years as a professional coach, I have…

One Breath at a Time Overwhelmed. Anxious. Freaked out. Scared.…