HITS–Thermal: Talk of the Winter Horse Show Circuit Records Set For Second Half 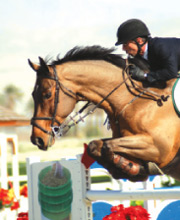 An outstanding start to the 2011 HITS Desert Circuit, combined with absolutely fabulous desert weather, has made Thermal the talk of the winter horse show circuits which also take place in Florida and Arizona. The first three (of six) week competition concluded on February 13th with the second half continuing through March 13th.

Demand for participation in the second series was so high, HITS shipped an additional 1,000 tent stalls to Thermal to accommodate the increased volume for the show.

“We are seeing a shift in California with this year’s Circuit,” said Tom Struzzieri, HITS President and CEO. “Interest for the horse show is about as high as it’s been since moving to the new facility, which speaks to both the resurgence of the West Coast horse show economy and the maturing of the show grounds in Thermal. In fact, we have stopped taking entries for Desert Circuit V and that’s the first time that week has sold out since the show moved to its new location.”

Competitors from around the globe participate in the Thermal horse show. Canadian Olympian, John Pearce, now a resident of Bermuda Dunes, came out strong in week I by winning both of the show’s first two Pfizer $1 Million Grand Prix qualifying events. To qualify for the sport’s largest purse event, which takes place this September in New York, riders need to show in 8 qualifying events. Once completed, the money won on their leading horse places them in the Rider Rankings, and come September, the top 40 horse and riders will have their chance to compete for the big prize. Currently, Pearce, who finished third in the 2010 Pfizer Million and took home $120,000 for his efforts, is sitting in third place in the 2011 Rider Rankings. Pearce has participated in 6 Grand Prix Qualifiers so far and has pocketed a total of $22,000 in prize money aboard his leading mount Son of A Gun.

“HITS Desert has grown to be a five star event,” states Pearce who has shown at North America’s best facilities including the recent FEI World Cup in Lexington. “The Pfizer Million qualifiers now attract international competition, which is good for the local economy–and great for spectators! A Sunday afternoon in the sun watching top competition is fun for the entire family and we competitors–both horse and rider–love to see the crowds.”

March competition  resumes  March 1-6 with week V and will be highlighted by three more Pfizer Million Qualifiers, including the fourth and final FEI World Cup Qualifier, the second of three European Youngster Cup (EY-Cup) Qualifiers, and the $5,000 Devoucoux Hunter Prix. 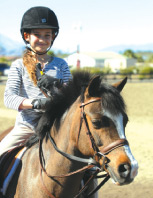 A young competitor warms up her pony. Photo by Flying Horse Photography.

HITS Desert Horse Park is located on Airport Blvd in Thermal and this world-class event is not to be missed! Admission is free Tuesday through Friday. On Saturday nights and Sundays admission is $5 for adults and senior citizens and children under 12 are free. Parking is $5. For a complete show schedule and directions visit www.HITSshows.com