Health is a Choice: Bronwyn Ison 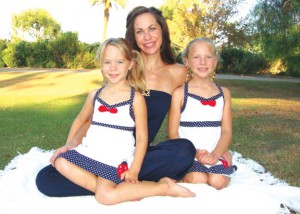 After reading Desert Health ® ’s October feature on breathing, I expressed my appreciation for this newsworthy editorial, and was asked to share my life-changing struggle with Valley Fever (VF). VF is a debilitating lung disease which is challenging to diagnose as its symptoms mirror those of other conditions.

Everyday we use our life force to keep our heart beating. We breathe. Never did I imagine inhaling and exhaling would make me so ill. I contracted VF near the tail end of my second pregnancy, while also raising a toddler on my own. My name is Bronwyn Ison and this is my story…

During my third trimester, I developed a chronic cough. I wrote it off as a new allergy. Then, ten days after delivering my baby girl, I came down with pneumonia. A prescription helped me to overcome the pneumonia, but the chronic cough persisted and was even more fierce than during my pregnancy. I was fatigued and stressed. The pressure in my head was intense from coughing, and my chest felt weighed down by a ton of bricks. I developed a spiking fever and night sweats. I knew something serious was happening in my body.

After several visits to my primary care physician, I was prescribed medication and an inhaler for what might be asthma. After six months of back and forth to the doctor, this turned out to be a failed attempt to cure my illness. As a last resort, I was tested for Valley Fever. I had never heard of this condition, but would come to learn that VF, also known as Coccidioidomycosis, is a spore (fungus) found in the earth’s soil. It is most prevalent in Arizona, where I was living at the time, but also found in Nevada, Central California, and Texas. Since the spore is airborne all you have to do is breathe. The fungus attaches itself to your lungs and you become its host. VF begins wreaking havoc on your lungs and immune system, and mimics flu-like symptoms. With this diagnosis, I delved into learning as much as I could about the disease.

According to the University of Arizona College of Medicine, the number of reported VF cases is rising each year. In 1997 the state of Arizona made VF a reportable disease, and by 2010 a reported 11,888 per 100,000 people tested positive for VF. The American Lung Association reports that areas with mild winters, agriculture, and dust storms can stir the fungus into the air. It is possible to breathe the fungus into your lungs and not develop symptoms. Those with compromised immune systems are most at risk, including: the elderly; women in their third-trimester of pregnancy; HIV positive patients; organ transplant recipients; those undergoing advanced chemotherapy; and others with immune diseases. Patients who develop VF often fight the fungus using their own immune systems. The Directors of Health Promotion and Education report that 60% of infected people have no symptoms. Nearly 35,000 cases were reported in California last year.

Struggling to recover, I moved back home to the Coachella Valley so my parents could help with the kids. I continued with blood tests, which would often come back negative although I still felt ill. X-rays and a CT scan told the story of my year-and-one-half long battle. Palm Springs Pulmonologist, Dr. Ziad Tannous was the first doctor to give me real answers. My CT scan revealed nodules on both lungs. My mother and I sat nervously while we waited to hear the results. “You indeed had Valley Fever but are clear now. The nodules are benign and calcified. You fought VF off with your own immune system.” The news prompted my deepest breath in quite a while.

Valley Fever is on the rise and there is no known cure or vaccine. The University of Arizona’s Valley Fever Corridor Project is diligently working to keep physicians educated about the disease as VF is not treated in a timely manner. Those who suffer from Valley Fever can and do recover, although those who struggle with a compromised immune system may experience more serious pulmonary problems and relapses.

I attribute my successful recovery to many lifestyle factors including the yoga breathing exercises I practice on a daily basis. A healthy diet, a strong spirit and mind, my two little girls and my family, also kept me going when I didn’t think I could. Exercising my lungs through yoga breathing is an important part of my daily routine and just the medicine I needed — and still need — to promote healthy lungs.

Healthy lung function is vital. In the case of battling VF, it is essential. We breathe to live and live to breathe.
Bronwyn Ison is a yoga instructor with open (public) classes at the Empire Polo Grounds. Bronwyn can be reached at bronwynliv24@yahoo.com or visit www.BronwynIson.com