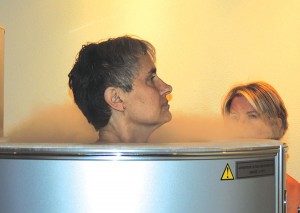 When Terry Wahls, MD, was in the Valley in May, Susan Butler of Kinetix Performance Center invited her to try Cryotherapy. Dr. Wahls was not familiar with the treatment, but understood the benefits of extreme cold for inflammation, and often took ice baths for the restless leg syndrome that accompanied her multiple sclerosis.

“Restless leg is common for people with MS, but can occur with many other conditions,” she said. “As my MS symptoms continued to improve with The Wahls ProtocolTM, unfortunately, my restless leg did not, so I continue to treat it with other traditional therapies.” Wahls uses Paleo principles, nutrition, and exercise to improve and minimize her MS symptoms.

I know that Cryotherapy is evidence-based and minimally invasive, but I’ll admit to being a bit nervous about our guest speaker trying something new before her big presentation that evening. She assured me it would be ok, noting that many studies support extreme cold therapy. She had gotten out of the habit of her nightly baths about six months ago and liked the idea of a “chill session” that only lasted 2-3 minutes.

Upon arrival, Susan took Dr. Wahls’ external body temperature and gave her the overview of what to expect. The chamber creates temperature ranging between -140 to -170 degrees Celsius (-220 to -274 Fahrenheit), which Wahls noted was “somewhat intimidating.”

With her first session, she described the feeling as “a bit uncomfortable because you don’t know what to expect,” and the cold created a slight feeling of burning in her thighs. She made it through the full 3 minutes and observed the internal effects over the next hour with interest and amazement. When Susan said that the treatment could be done two times a day, Dr. Wahls made a second appointment for that afternoon.

That evening, she slept through the night – unusual as most of the time she has multiple awakenings due to the restless leg. She made an early morning appointment on the second day in an attempt to maximize the benefits before heading home, as Susan researched and found no Cryotherapy in her region.

Dr. Wahls continued to report improved sleep. She was impressed with Cryotherapy and plans to add it to the list of non-pharmacological therapies she is currently conducting and studying. She also returned to her nightly ice baths and notes that if people try this home remedy, it is important to monitor skin temperature and to keep it above 55 degrees (external thermometers are available at local drug stores). It is also not recommended for those with Raynaud’s phenomenon, a contraindicator for Cryotherapy as well.

“You are lucky that Kinetix offers this therapy; it is beneficial to many conditions,” says Dr. Wahls. “And it was certainly easier and more comfortable than ice baths!”

For more information on Cryotherapy visit www.kinetixcenter.com/health-wellness or call (760) 200.1719.

When the Going Gets Rough, Check in with Yourself 2020 has been challenging. These months of sheltering…