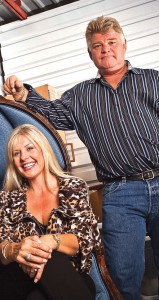 Dan’s gruff voice, fast-paced chatter and packed schedule give the sense of ‘life in the fast lane’ and it was, until a fateful day in June of last year that changed his life forever.

Waking in the morning feeling strange with blurred vision, Dan thought a shower would be the answer. After showering, he collapsed. Fortunately, Laura was there to catch him and to call 911 when Dan started turning blue. Little did they know that he was suffering from an aneurysm that almost took his life.

“Laura and my son started CPR with the paramedics on the way,” Dan told Desert Health® in a December interview. “Their efforts, in addition to the incredible team of doctors I was soon to meet, are the reason I am here today.”

Dan was transported to Redlands Community Hospital where they discovered the first aneurysm and told Laura that his chances of survival were slim. His doctor determined he would be better served by the neurointervention specialists at Desert Regional Medical Center, which serves as the Advanced Intervention Stroke Center for Riverside Emergency Medical Services Agency (REMSA) as well as the Stroke Receiving Center by the Inland Counties Emergency Medical Agency (ICEMA).

It was there through advanced technology that Dan’s second, smaller aneurysm was discovered.

After Dan’s bleeding and blood pressure were stabilized, he underwent a successful five-hour surgery and remained at Desert Regional for 21 days, which is standard protocol according to Dr. Asif Taqi, the director of neurointervention and critical care neurology, who performed Dan’s surgery. “We have found that while 2 out of 3 people who suffer aneurysms make it to the hospital and through surgery, one of them (50 percent) would suffer a major stroke at around day 4-21 post bleeding. So we keep patients for 21 days to ensure stability, proper hydration and nutrition.”

Laura was able to see Dan shortly after the surgery and her first sight was Dan’s arms in the air. She immediately thought ‘therapy can help that’ until she learned that he was actually calling out auction numbers much to the disbelief of his attending staff. 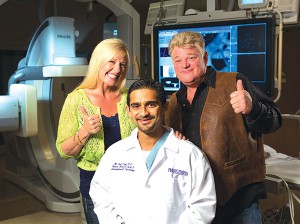 Dr. Taqi led the team at Desert Regional Medical Center who performed Dan’s surgery and helped save his life

During his stay at Desert Regional he slowly worked his way back to cautionary health. “They fed me well, took such good care of me, and got me back on my feet,” he says. “For the first time, I started paying attention to myself.” Dan realizes how lucky he was, and since the incident has made major lifestyle changes. A smoker since age 16, he began nicotine patches four days out and quit taking daily pain medication. He cut red meat down to once a week and now works with a nutritionist to maintain healthy eating habits, which has allowed him to drop his cholesterol medicine. He keeps a close eye on his blood pressure. “I don’t want to screw up the incredible work of these talented doctors,” he says.

Back to his hectic filming schedule, he now takes things one day at a time. He says he can feel his brain mending and getting stronger, and even takes time to mindfully breathe and meditate. “I can actually take 30-40 points off my blood pressure by simply deep breathing.”

“Doctor Taqi and his team are truly amazing,” he adds. “I am one of the lucky ones, but they do this work day in and day out, and not everyone is as lucky as me. I commend them for taking on that responsibility and that stress in an effort to save the lives of others.”

“I used to live like there was no tomorrow. Now I know I am truly blessed to be here,” he humbly concludes. “My hat’s off to all the men and women who worked with me. I owe them a debt of gratitude for saving my life.”