Lyme disease is on the rise. Once prevalent only in the northeast, the infectious disease has now been reported in every state in the US, and throughout the world. In 2012, the Centers for Disease Control (CDC) reported 30,000 cases annually, only to revise that statistic to 300,000 in 2013.1

The probable stats are due largely to the fact that diagnosis can be challenging, and no fool-proof testing methods have been established – both considerations most troubling for those who suffer from the often debilitating condition. Diagnosis is based primarily on symptoms which can mirror other conditions and vary from person to person including extreme fatigue, fever, skin rash, muscle and joint aches, and swollen lymph nodes.1 Blood tests may be taken to detect antibodies against the Borrelia bacteria (Borrelia burgdorferi is the predominant causative agent of Lyme), but these tests are not deemed 100% reliable.

As a result, many patients are turned away undiagnosed, which can be detrimental, because if left untreated, the infection can spread to joints (causing arthritic symptoms); the heart (causing palpitations and dizziness); the nervous system, and even the brain (causing problems with short-term memory).1

The key with Lyme disease (LD) is early detection. National Institutes of Health studies have shown that most patients recover when treated with a few weeks of antibiotics, but a large number of patients remain undiagnosed, and antibiotics are less effective in later stages of the disease.2

As such, many practitioners and patients are turning to alternative methods for both diagnosis and treatment. Michelle Steadman of Indio is one of them. Many know the desert native as an active Pilates instructor and the founder of TRUElicious Raw Superfood Bars. But the
hard-working entrepreneur came to a halt when Borrelia bacteria was identified in her blood.

In the Summer of 2013, Michelle was in full start-up mode with TRUElicious when she started feeling ‘off ’ with signs of a bladder infection. She turned to a trusted member of her natural health care team, certified blood microscopist Jenny Holmes of Joshua Tree. Microscopists observe blood samples, noting changes that help identify disease. Michelle had been working with Jenny for seven years, and thus had a baseline of her healthy blood profile. This trip produced signs of bacteria that Holmes recognized as Borrelia.

“Blood microscopy is an effective tool for health care practitioners to consider when assisting one in establishing treatment plans for conditions that are hard to diagnosis, including Lyme,” says Holmes who works with many integrative medical doctors, including Lyme specialist Chitra Bhatka, M.D., of Orange County Integrative Medical Center.

In Norway, many who feel they have LD and remain undiagnosed are heading to Oslo University where two biologists are using microscopy to identify the changing life cycles of the spiral bacteria which can take many forms, and bore into blood cells to move throughout the body.

The primary form of testing in Norway is through antibody detection as well. “We believe, contrary to the official stance, that the antibody reaction wanes in people who have been sick for a long time, and that only a small minority of those with chronic borreliosis test positive,” explain Ivar Mysterud and Morten Laane who have published their findings in the journal Biological and Biomedical Reports. “The Borrelia infection suppresses the immune system so that is does not function properly. This is one of several reasons that it is difficult to give a definitive diagnosis.” 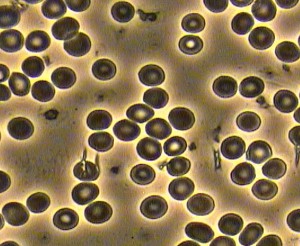 Through the lens, they are able to see how the LD bacteria differ widely in shape and appearance, and are good at camouflage. As soon as the highly mobile and active bacteria experience deterioration in their living conditions, they form cysts, which are the dormant stage of the life cycle. Bacteria may also aggregate in colonies in a slime called a biofilm to protect themselves from external threats such as antibiotics, disinfectants and the body’s immune system. When the environment is favorable once again, the Borrelia bacteria revert to their usual spiral form, and it is there that both cysts and individual structures may germinate and produce new “spirochetes.”3

“Lyme bacteria cannot live in oxygen-rich environments so they migrate to areas of weakness in the body where they multiply,” explains Holmes, who referred Michelle to a clinic in Costa Mesa. But because of her demanding schedule, Michelle opted to simply take natural antibiotics and schedule a follow-up with Holmes. There are numerous natural antibiotic formulas that include herbs such as goldenseal and Echinacea, and they worked to clear Michelle’s bladder infection, but soon after, she began experiencing other symptoms like fatigue and shortness of breath. She also felt as if her esophagus was swelling and food would sit in her throat, a potential sign of swollen lymph nodes.

For the next 3-4 months her health started to decline; however, she put any thoughts of stopping work aside, knowing that her family business could not operate without her. Her bars had just been accepted at Whole Foods Market which required moving production out of their home and into a manufacturing plant which she and her husband, Kevin, were to build from the floor up. She had to get new packaging, permitting, certifications, licenses, and more, and considers those few months the most stressful in her life. “It was the most exciting time of my life, yet the most stressful, and truly almost killed me. I just felt myself getting sicker and sicker, but I put it aside because I had a job to do.”

She remembers a picture of her and her family standing next to their product display on the opening day of Whole Foods in Palm Desert. “I looked at that picture and realized that I was so very sick.” A week after opening, she knew something was really wrong. She returned to see Holmes, who this time not only identified active bacteria, but also prevalent c-reactive proteins which indicated severe inflammation throughout Michelle’s body. She strongly encouraged Michelle not to wait any longer and to seek immediate care.

As she had her entire life, Michelle chose to seek alternative treatment and made an appointment with the team at Know Your Options in Costa Mesa where Holmes also works. The clinic is headed by Jacob Swilling, Ph.D., who has been consulting on cases like Michelle’s for over 20 years.

The protocol theory at Know Your Options is to enhance the body’s own immunity to fight the disease and to create an environment in which the bacteria cannot survive. Components include strict diet and supplementation; increasing red blood cell counts through simulated elevation (via CVAC); oxygenating the body with hyberbaric oxygen therapy (HBOT), and detoxification. The concentrated protocol is intense and required that Michelle put her life on hold in order to heal.

“I have always worked 3 to 4 jobs at a time my entire life,” says Michelle. “For me to allow myself time to heal was very hard, but at that point, I physically felt like I was dying inside. I spent most of my time in bed and couldn’t even climb stairs at home. It was a horrible feeling and hard to explain.” She had read about people who had been bed ridden for years with LD and decided she had to do this. “I couldn’t afford to do it, but for my health, I couldn’t afford not to do it.”

Fortunately, she had the support system around her to believe in the therapies she chose and to pick up the pieces in her absence, and while the protocol was very challenging for Michelle, her commitment paid off. One month later, she woke up feeling good once again.

Michelle packed her bags and checked into a hotel near Know Your Options for two weeks of concentrated treatment. Based on her microscopy report, a supplement plan was developed that included 32 doses of different enzymes, herbs, vitamins, and minerals scheduled throughout the day, and a strict diet of organic whole foods.

Her therapies included three daily treatments of Cyclic Variations in Adaptive Conditioning (CVAC) which challenges the body to adapt to varied changes in air pressure (like training at higher altitudes while lying down), followed 24-hours later by HBOT to oxygenate the new blood cells and create an unfavorable environment for the bacteria.

After six CVAC and two HBOT sessions, another analysis showed Michelle’s blood on fire with activity; the spirochetes, which usually hide in tissues and cells were out – they were agitated and on the run. Her treatment plan was working. She returned to the desert and continued HBOT treatment at Desert Longevity Institute under Daniel Johnson, M.D., and

drove back to Costa Mesa once a week to continue CVAC.

Not long after her return, her body’s natural detoxification process began and Michelle experienced “herxing” which occurs when dead or dying bacteria release large amounts of toxins into blood and tissues at an alarming rate, provoking a sudden and exaggerated inflammatory response as the body attempts to eliminate the released toxins much faster than it is able to. Herxing is said to also occur in those treated for Lyme with pharmacological antibiotics.4

The experience was excruciating, and Michelle added hydro colonics along with probiotics to aid in detoxification. “Everything I had to do was out of my comfort zone, and I had overcome,” she says. The HBOT chamber made her feel claustrophobic, the CVAC challenged her system, and the colonics were not in her plan. But she stuck to it knowing she had to get back to her life.

One month after starting treatment, her microscopy showed the Borrelia still present, but it was very faint, and her inflammation was reduced significantly.

Her practitioners warned her that her body was still going through the healing process and that she would have both good days and bad. And she did, but she pressed on with the protocol for another month and at the end of 60 days, her blood was clear.

Many reading this article will feel that Michelle should have gone to a medical doctor and taken prescribed antibiotics at the first sign of illness. But her initial symptoms were not typical of Lyme, which is why many with this disease are misdiagnosed or undiagnosed.3

“Lyme disease is often referred to as the ‘great imitator’ because it mimics other conditions, often causing patients to suffer a complicated maze of doctors in search of appropriate treatment,” says Chitra Bhakta, M.D.

The choices Michelle made were right for her, and she remains symptom free today. After her life-changing experience, she has learned to better honor and listen to her body. When she gets tired, she lets her body rest.

She is a firm believer that there are many factors that contributed to her healing – not only the natural modalities, but also the internal mindset and support system around her that enabled her to get through it.

She has since met numerous people who themselves are struggling with LD, and she finds it heartbreaking that they won’t follow in the footsteps of the many who have successfully sought alternative methods, because for her, it worked. “Two factors have to be in place,” she notes. “You really have to be open to natural remedies, and you have be in the mental space to really deep down inside want to get well.”

And that is where Health is a Choice.

If you are experiencing symptoms similar to Lyme disease (www.cdc.gov/lyme), it is strongly recommended that you seek help from your primary care physician or health care practitioner and begin treatment early. Do your research and know the options available to you from both the medical and natural health communities.